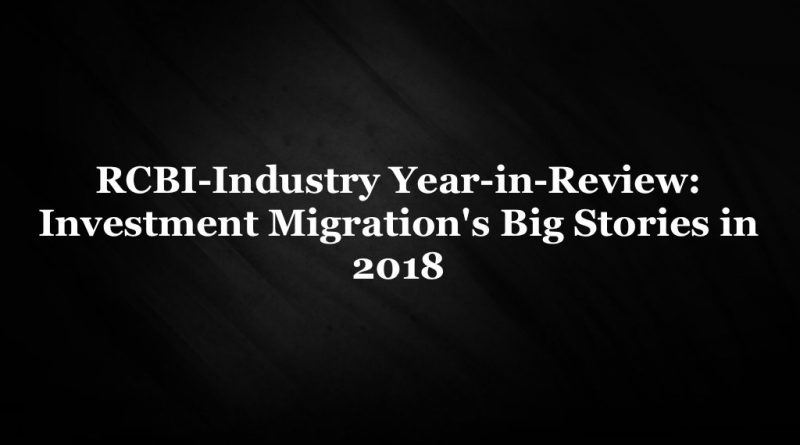 In lieu of a newsletter summing up the past week in investment migration, this week we’re reviewing 2018 as a whole.

On the whole, 2018 was the investment migration industry’s best year on record in several respects; never have so many individuals invested so much in so many residence and citizenship by investment (RCBI) schemes. An ever swelling number of programs – with price points running the gamut from $30,000 to £2 million – are bringing the market into the arena of the mass affluent.

Investing in a residence permit or a passport is quickly becoming ordinary and unremarkable, a matter that’s attracted the attention of a long list of small economies now realizing the untapped economic potential available to them through the opening of an investment migration program, but also that of the industry’s skeptics.

China remains – by a wide margin – the largest source market for investment migration; globally, over the last 12 months, roughly half of the more than 54,000 individuals who participated in a residence or citizenship by investment program were Chinese nationals.

Conservatively estimated, the RCBI-industry raised in excess of US$14 billion in FDI, around US$8 billion of which came from China.

While the market as a whole has seen across-the-board growth in excess of 20% compared to last year, some programs have enjoyed more of those gains than others; Portugal, for many years the undisputed leader of European golden visa programs, has seen its application volumes plateau thanks to a drop in interest from Chinese applicants who increasingly prefer Greece, Malta, and Ireland.

There are nine million bicycles in Athens

The big winner in 2018 has been the Greek Golden Visa program; With 3,404 main applicants and 5,495 dependents obtaining residence permits already by September this year, its 2018 application numbers are on track to more than double its 2017 record. Before the year is over, Greece’s Golden Visa program will officially become the world’s most popular residence by investment program, surpassing even the US EB-5 scheme.

A handful of factors have catapulted Greece to pole position:

It offers residence permits for far less than its main European competitor, Portugal, and its real estate prices are also historically low; while Portugal’s housing price index is 30% above its last peak in 2008, that of Greece is 40% below. This explains much of Greece’s rising star among Chinese applicants, who have gone from constituting a quarter of all applicants in the program in 2017 to more than half today. If there’s one asset class with which Chinese investors are familiar and comfortable betting on, it’s real estate.

Moreover, Greece, unlike traditional Chinese favorites like the US EB-5 and Quebec IIP, does not impose any per-country quotas, which means there are no multi-year waiting lists for applicants from China.

The Chinese government’s increasingly close relationship with Greece – investment in key infrastructure (belt and road), the promotion of tourism to the country, and so on – further eases the path for prospective Chinese residents.

The market has grown on the supply-side as well; three new citizenship by investment programs – Montenegro, Moldova, and Jordan – opened this year. While in 2010 there were only two formal CIPs – Saint Kitts & Nevis and Dominica – there are now 12; five in the Caribbean, four in Europe, one in the Pacific, and two in the Middle East.

The growing popularity of investment migration – both among investors and countries seeking non-tax revenue – has not gone unnoticed among opponents, chiefly from left-leaning politicians and press. The industry is now routinely a topic of media attention, nearly always of the unfavorable kind, and invariably mischaracterized.

Industry professionals will have their work cut out for them in correcting a flawed and unfairly negative perception among the lay public.

The most popular stories in 2018 by category

New features and projects we introduced in 2018