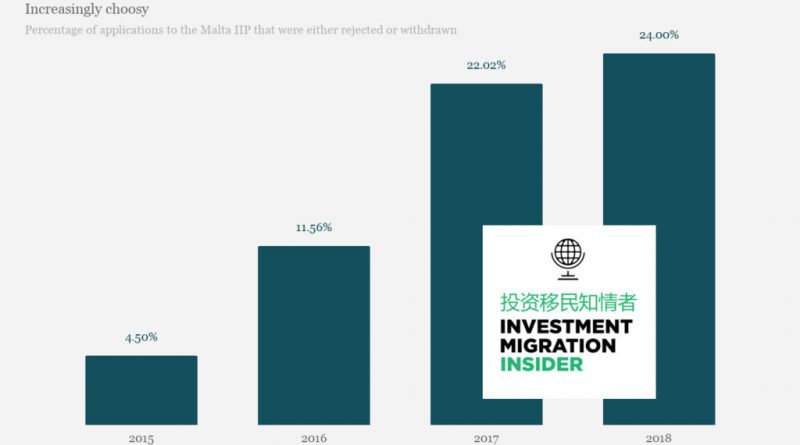 Speaking to Malta Today, Jonathan Cardona, head of Malta’s Individual Investor Programme (the MIIP), said that, since the beginning in 2014 and until the present, the CIP he heads has rejected some 24% of all applicants.

A quick look at the data as reported in the annual reports of the Office of the Regulator of the Individual Investor Programme (ORiip) – which cover the periods between the end of June and the beginning of July each year and are published every November – reveals that rejection rates have risen sharply each year since the program opened four years ago.

Rates of rejection have risen five-fold since 2015

While data on rejection rates for the period June 31st, 2017 to July 1st, 2018 will not be available to the public until November, we can safely presume it will be significantly higher than last year’s 22% considering the cumulative rejection rate has risen by two percentage points according to Cardona.

Malta’s due diligence, in other words, is becoming more stringent and effective by the year, and the program increasingly picky (although not as picky as New Zealand’s investor visa program which turns down half of all applications).

Read also: Malta PM: Applicants Rejected by Other Programs Should “Not Even Bother” Trying Malta IIP

“85% of our work today is due diligence,” said Cardona, who also indicated he felt comfortable the MIIP would hold up well to even very close scrutiny by the European Commission, which is preparing a report on the effectiveness of due diligence among CIPs and golden visas within the European Union.

“Our due diligence team today is almost entirely composed of former risk and compliance officers who worked at major banks,” continued Cardona, and went on to explain in detail the four-tier vetting process his agency employs, about which interested parties may learn more by reading Malta Today’s article.