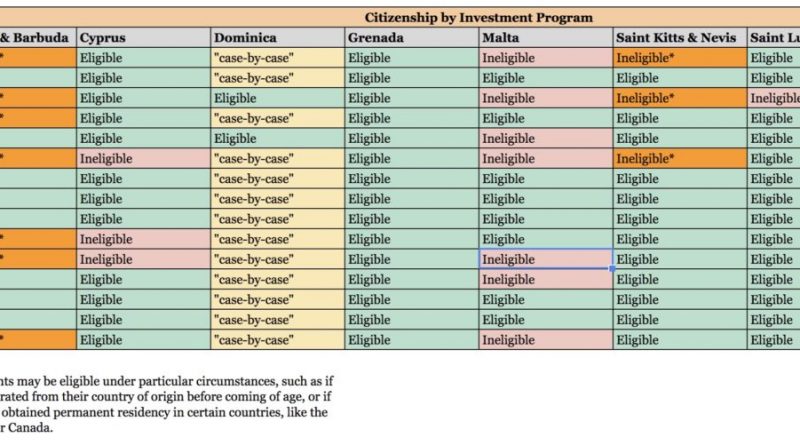 Many of the world’s citizenship by investment programs (CIPs) impose restrictions on the countries and territories from which they accept applications. We’ve compiled an overview.

Citizens of a country (and, in some cases, territories, such as Chechnya) are either eligible, ineligible, or partly eligible to apply for a citizenship program; While some programs impose blanket restrictions on certain nationalities under any circumstance, others impose partial restrictions that allow more room for individual considerations. Others yet impose no restrictions at all but treat applications from risk-prone regions with extra care.

If you find we’ve made a mistake in compiling this list, please email the editor on cn@imidaily.com.

Nationals of the countries listed are eligible to apply for citizenship by investment in Antigua and Barbuda but only if they meet the following criteria:

“Individuals born in these restricted countries but who migrated before the age of majority and/or have maintained permanent residence in Canada, the United Kingdom, the United States of America, Australia, New Zealand, Saudi Arabia and the United Arab Emirates, for a period of not less than 10 years and maintain no economic ties to any restricted country.”

Nationals of North Korea, Sudan, and Somalia are ineligible to apply for citizenship by investment in Cyprus.

Dominica imposes no outright bans but nationals of the following countries and territories are treated on a “case-by-case basis”:

Grenada does not explicitly restrict citizens of any countries or territories.

Nationals of Afghanistan, Iran, and North Korea – and even non-nationals who reside, do business with, or have significant ties or connections to these countries – are permanently ineligible for the Individual Investor Programme.

Furthermore, the IIP’s official website states that “citizens from countries that are on the US travel ban also cannot apply”. Presumably, what they refer to is Executive Order 13780, signed by President Trump on March 6th last year and upheld by the Supreme Court in June 2018. As of the most recent revision in April 2018, the ban covered Chad, Libya, Somalia, Yemen, Iran, North Korea, Venezuela, and Syria.

Moldova and Montenegro will be formally launching their programs later this year but, as official program guidelines are still in the making, which nationalities (if any) will be restricted is still unknown.

Nationals of Afghanistan, Iran, and North Korea are ineligible for citizenship by investment in Saint-Kitts & Nevis unless the applicant is a permanent resident of the United Kingdom, the United States, or Canada.

Saint Lucia does not impose any formal bans but, as explained earlier this week, are unable to process applications from Iran.

Citizens of Iran, Iraq, Syria, North Korea, and Yemen are ineligible for citizenship by investment in Vanuatu.

Why are there differences between programs? Should there be?

This week, we learned that Saint Lucia will no longer be accepting applications from Iran because their due diligence (DD) service providers claim they are not able to reliably verify information on site in Iran and that, furthermore, the bank that Saint Lucia’s CIP uses for the fund transfers will not facilitate payments from Iranians.

But if the DD companies cannot reliably verify intel in country X and, consequently, leave CIP X with no option but to reject applicants from that country, why would the DD firms (usually, CIPs across the world work with the same three or four service providers) be able to conduct reliable vetting in the same country X on behalf of CIPs Y and Z?

Either gathering the requisite background intel is not feasible in country X – in which case country X’s citizens should be barred from all CIPs and not just some – or gathering the intel is feasible, in which case the ban on citizens of country X has nothing to do with an inability to conduct due diligence but, rather more likely, springs from a motivation to placate political interests at home or abroad.

Barring citizens of a certain country from applying for political reasons isn’t inherently wrong, but let’s not then blame it on due diligence shortcomings.