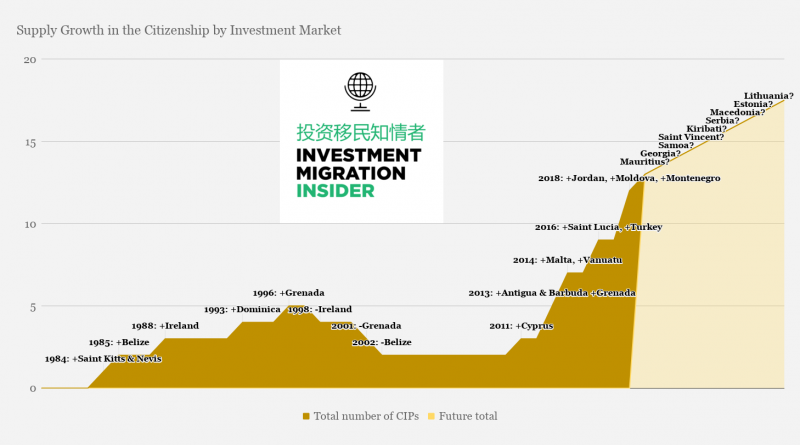 Over the last seven years alone, the number of formal citizenship by investment programs (CIPs) has grown from two to twelve, a formidable rate of growth. But where is the CIP-market going next? Which countries may be opening citizenship programs in the near future?

I’ve done a quick back-of-the-napkin analysis to find out.

CIP-proliferation is not a foregone conclusion

2018 has been a good year for citizenship by investment, with three new programs (Montenegro, Moldova, and Jordan) and record numbers of applicants worldwide. But the unbridled blossoming of programs that characterized the last five years is by no means typical; the market has had its ups and downs.

While we now have a record twelve programs and the stage looks set for further growth, the market’s previous apogee – in 1996, when the world had five CIPs – was followed by five years of decline, Ireland, Grenada, and, finally, Belize closed their programs.

By 2002, the number of CIPs had reached its first low-water mark; only two programs – Dominica and Saint Kitts & Nevis – remained afloat.

The market then entered a period of stagnation (a CIP “dark age” if you will) and did not truly exit its decade-long spell in the doldrums until 2011 with the Cypriot launch of an EU-country program – the holy grail of CIPs – which marked a turning of the tide.

Last year, I wrote a very popular article in which I went on record with predictions on how the CIP-market would develop over the next ten years, making some qualified guesses as to where new programs might emerge.

I considered the conditions under which the market might flourish, which factors might cause it to wither, and prognosticated that 7-9 new CIPs would open by 2027. Thanks to three new program openings since then – right on track with my predictions – my prophetic bona fides remain intact.

You can read that article here: Future of the Citizenship-by-Investment Market: Predictions for 2027

This year, I am taking a more systematic approach, by determining which countries have the fundamental characteristics necessary to open a CIP if they want to, but I am not making any predictions as to whether they will.

In that same article last year, I wrote:

“Not all countries qualify for a program; far from it. As in all markets, there are barriers to entry, and a jurisdiction must meet certain prerequisites even to consider itself a candidate. Chief among them is visa-free access to Schengen, a sine qua non for a CIP.

Among the good-to-have-but-not-strictly-necessary conditions are a common law legal system, English as an official language, political stability, low taxes and an economy small enough for a CIP to have a meaningful impact.”

Roughly speaking, then, a country only needs two characteristics to have CIP-potential:

With the abovementioned two criteria in mind, I’ve found 33 countries with clear CIP-potential.

Did I miss anything? Are there any countries that should be on this list but aren’t, and vice versa? Let me know in the LinkedIn or Facebook comments. And don’t forget to show your appreciation for the hard work I do by liking and sharing this with other RCBI-professionals.