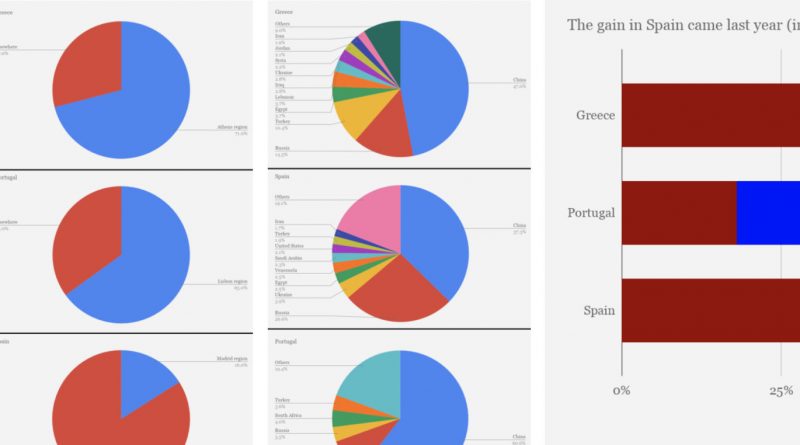 Greece, Spain, and Portugal are Europe’s hottest real estate-based golden visas. See how they stack up against each other in this statistical comparison.

While in Greece and Portugal applicants invest overwhelmingly in the capital region, only one in six golden visa holders in Spain bought property in Madrid, preferring instead to invest in Barcelona, the country’s second city, which received close to half of all property investment.

Chinese nationals are the biggest single group of investors across all three programs, but have an absolute majority only in Portugal (60%). Russians come in second both in Spain and Greece, but have been relegated to third place in Portugal, where Brazilians are far more numerous.

All three programs are largely driven by real estate (while Greece has announced plans to permit alternative investment options, these avenues are as yet not officially open) but, in Spain, nearly a third of golden visa investment is actually not real estate at all.

While investors in all three countries spend, on average, a great deal more on real estate than what is required of them, this tendency is particularly pronounced in Greece, where the mean value of property acquired under the golden visa is 2.6 times higher than the mandated minimum of EUR 250,000.

Portugal was, for many years, the unrivaled leader among Europe’s golden visa programs, but was this year suddenly surpassed by Greece. Spain’s program saw a tremendous boost in 2017, growing by 140% in that year alone.

While average family size among applicants to Portugal’s program was close to three, Spain appears to be attracting a great deal of bachelors (and bachelorettes); Spanish golden visa applications, on average, include only 1.87 individuals (including the main applicant).