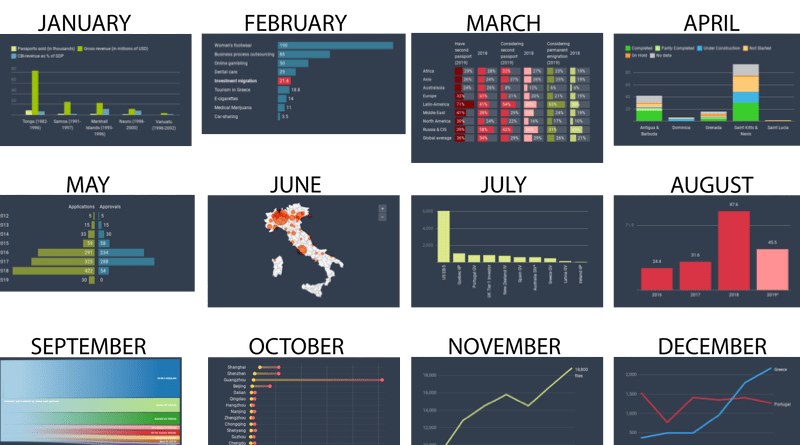 As 2020 beckons, we review the year in investment migration through 12 graphs and their accompanying articles, one from each month, telling the visual story of 2019.

In this article series, Stephane Tajick explored citizenship by investment programs that have gone the way of the dodo. Exploring historical data, this article focused on the CIPs that operated, more or less formally, in the Pacific during the 1990s.

By the end of 2018, investment migration had grown to become a US$21.4 billion-a-year market. In this article, we looked at past growth trends and used it to extrapolate hypothetical future growth scenarios for the residence and citizenship by investment industry.

71,300 UHNWIs Already Have Second Citizenship; Another 57,400 considering it

When Knight Frank released their annual Wealth Report, we zoomed in on the parts of it most directly relevant to investment migration; the degree to which UHNWIs are considering second citizenships and permanent emigration.

In April, having just launched CBI Real Estate Watch, a page aimed at keeping tabs on whether approved CBI developments actually come to fruition, we discovered that less than a third of designated investment projects had been completed so far.

Ireland’s Immigrant Investor program had been roaring ahead since 2016 when, in 2018, authorities suddenly appeared to struggle to complete application processing. The sudden hault, we learned, was due to an extensive government review of the program.

Italy’s Startup Visa Rejects Nearly Half of Applicants, 80% of Investment in Northern Regions

When we first began looking into the Italian Startup visa, in June, we found the program disproportionately benefited the wealthier northern regions – which is consistent with the general distribution of economic activity in the country – and that rates of applicant rejection varied starkly between nationalities.

The 10 Most Lucrative Golden Visas Last Year, According to the Statistics

In July, we went through the statistics for the last full year of all major residence by investment programs to determine which had brought in the most money to their respective economies.

One of the fastest rising CIP-stars in the last few years has been Vanuatu. For a long time, the local government had considered the program a mere convenient side-revenue and, consequently, had taken few active steps to improve its integrity or efficiency. In 2018, revenue suddenly tripled, making citizenship by investment the government’s single biggest revenue source, prompting authorities to take a more serious look at its running of the CIP.

57,000+ Chinese Spent More Than US$44 Billion on Golden Visas in Last Decade

In September, we went through the historical data of all major residence by investment programs to find out how many Chinese investors obtained golden visas in the last decade – and how much they invested.

China Has Up to 27,000 Immigration Agencies, Researchers Find

Chinese researchers conducted a study of the country’s recently deregulated investment migration market and found that, once licensing requirements had fallen away in November 2018, a flurry of new companies had entered the industry. Reporting data based on both a strict and broad definition, the researchers found China had between 4,857 and 27,238 immigration agencies.

Last month, Québec’s provincial government announced a suspension to its immensely popular Immigrant Investor program. A few days later, we learned that a backlog of nearly 20,000 applications had been an important factor in that decision.

Greek Golden Visa to Surpass 2,000 Main Applicants in 2019, 40% Ahead of Closest EU Competitor

The Greek Golden Visa program has gone from strength to strength for the last for years, beating its own application-volume and investment records for four consecutive years. When it overtook Portugal in 2018 to become Europe’s most popular, few had foreseen that it would extend its lead to some 40% ahead of its closest rivals before 2019 had even come to a close.