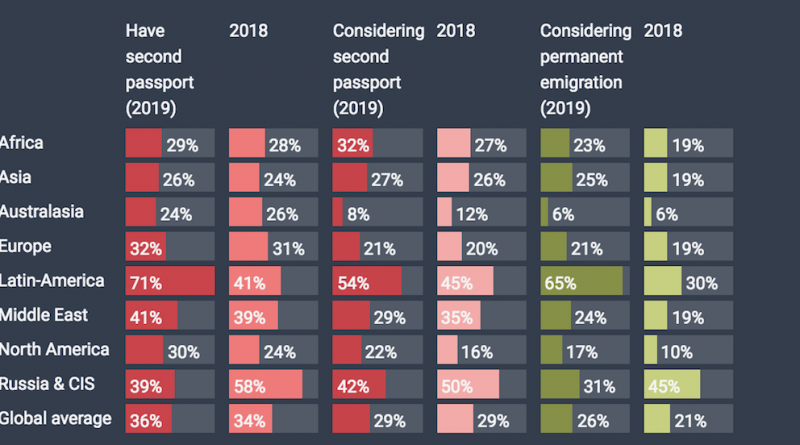 Data from Knight Frank’s Attitudes Survey reveals the share of Ultra High Net Worth Individuals holding a second passport – those with a net worth greater than US$ 30 million – has reached 36%, up from 34% in August last year.

A further 29% are considering citizenship, while 26% are contemplating permanent emigration.

In other words, not only is the share of super-wealthy interested in second citizenships growing; their absolute number is growing at an equally prodigious clip.

“Increasingly,” says the report, “governments around the world are targeting globally mobile wealth, albeit for a variety of different reasons. […] Enabling this is and residency by investment schemes, with Moldova and Montenegro the latest to jump on the bandwagon in 2018. “

While the rate of UHNWIs holding more than one passport has increased across the board (rates are up in all regions save for Australasia and Russia CIS), nowhere is the trend more pronounced than in Latin-America, where the share of ultra-wealthy who are dual citizens has catapulted from 41% to 71%.

The high rate of dual citizenship among Lat-Am’s super-rich is in large part attributable to the ease with which many of them can obtain Spanish citizenship by descent.

Indeed, the data shows that another 54% of Latin UHNWIs are considering citizenship, as are 42% of those in former Soviet states, 32% in Africa, and 29% in the Middle East.

Somewhat perplexing is the fall in of Russia-CIS UHNWIs holding citizenship from 58% last year to 39%, as well as a drop among those of the same demographic group who say they are considering another citizenship (42% versus 50% last year).

Possibly explaining this reduction is that there’s also been a significant fall int he of former Soviet citizens declaring their intentions to permanently emigrate, indicating that many have already left their home country, leaving behind fewer UHNWIs to consider and to obtain second citizenships.