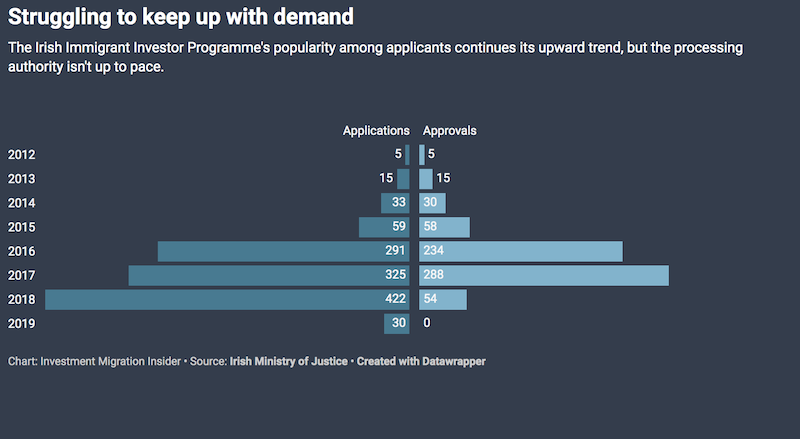 From the start of 2018 until May 2019, the Irish Immigrant Investor Programme received 452 applications. In the same period, they approved only 54 main applicants.

The Irish Immigrant Investor Programme has no shortage of suitors; application numbers have increased each year since the scheme opened in 2012 and the 422 applications received in 2018 marked an all-time high that topped off six years of consecutive growth. The problem is that program authorities are not processing applications fast enough.

See also: Ireland Has Raised North of Half a Billion Euros From (Mostly Chinese) Immigrant Investors Since 2012

While, between 2012 and 2017, program authorities dealt with the influx of applications in a timely manner, processing work appears to have ground to a near-halt from 2018 onwards. Of the 452 applications received in 2018 and 2019, 88% remain unprocessed.

Questioned in Parliament as to the program’s current processing times, Justice Minister Flanagan attributed the remarkable difference between the number of applications received and applications processed to an ongoing review process.

“During 2018, the Irish Naturalisation and Immigration Service (INIS) introduced a number of enhanced control mechanisms to ensure the programme operates to the highest standards including personal and financial checks. While this has led to a temporary increase in processing times in this calendar year, I expect that decisions on a significant number of 2018 applications will be made in the coming weeks,” responded Flanagan.

“An independent external review of the IIP is underway and it is expected that the review will be concluded in the second half of 2019,” he added.

Hundreds of firms can assist with applications to the Irish Immigrant Investor Programme. See which ones in the RCBI Company Directory.

Flanagan, moreover, commented that processing times average between six and nine months which, he claims, compares favorably to international peers who he says take 1-2 years to decide. IMI is home to the world’s most comprehensive database on investment migration, and we are not aware of any residence by investment programs that take two years to process applications. That the Minister responsible for the Irish program would make such claims in Parliament is disconcerting.

Applicants appear to have taken note of the sharp downturn in processing efficiency; Investors filed only 30 applications in the first quarter of 2019 – none of which have been approved so far – which equates to only 120 applications on an annualized basis. In other words, unless authorities return to processing at an acceptable rate soon, Ireland is looking at a 72% year-on-year drop in program revenue this year.