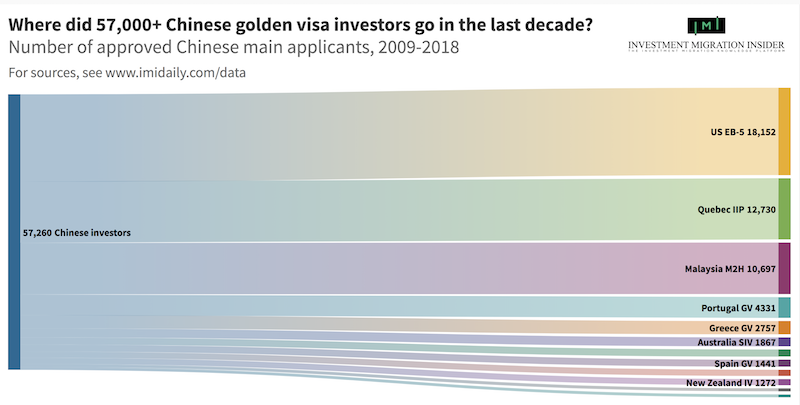 We’ve gone through the historical data of all major residence by investment programs to find out how many Chinese investors obtained golden visas in the last decade – and how much they invested.

A note on the numbers

The numbers presented herein are, therefore, highly conservative. The actual figures, while not verifiable, are significantly higher, partly because participants virtually always invest more than the minimum and partly because some of the most popular programs of the past are not included in the calculation.

Why the number of Chinese applicants is so important

Chinese applicants are the primus motor of the global residence by investment market and account for about two-thirds of golden visa investment worldwide. They make up an absolute majority of applicants in most programs, and a plurality in all others with the exception of Latvia’s golden visa, where Russian interest prevails.

The United States has historically been – and continues to be – the chief beneficiary of Chinese investor migrants and their capital. In the last ten years, the US EB-5 program has been the program of choice for roughly one in three Chinese golden visa investors (although that share would be lower if historical data from Hong Kong and Canada’s federal IIP were included).

With almost 13,000 Chinese main applicants since 2009, Quebec’s IIP, which limits the number of main applicants from China per year to about 1,250, is second on the list, followed closely by Malaysia’s My Second Home Program.

Note that all three of the above-mentioned programs opened many years before the remaining countries on the list, giving them not only a first-mover advantage but also an edge over the rest thanks to their greater number of years in operation. On a per-year basis, however, application volumes for the Portugal and Greece golden visas rival those of the Quebec IIP.

The US EB-5 and the Quebec IIP also take the top two spots in terms of investment raised from Chinese applicants. Approval numbers and investment in the EB-5 program, however, don’t have a direct correlation because of the USCIS’ retrogression issue; Chinese applicants invest first and get their visas much later.

Malaysia’s M2H, meanwhile, disappears entirely from view when programs are compared on total investment because it does not, strictly speaking, require investment but, instead, has financial conditions related to disposable income.

Also here, readers must take into account the relative youth of European and Oceanian programs compared to those of North America. On a per-year basis,

If you like this article, you’ll love our Data Center.