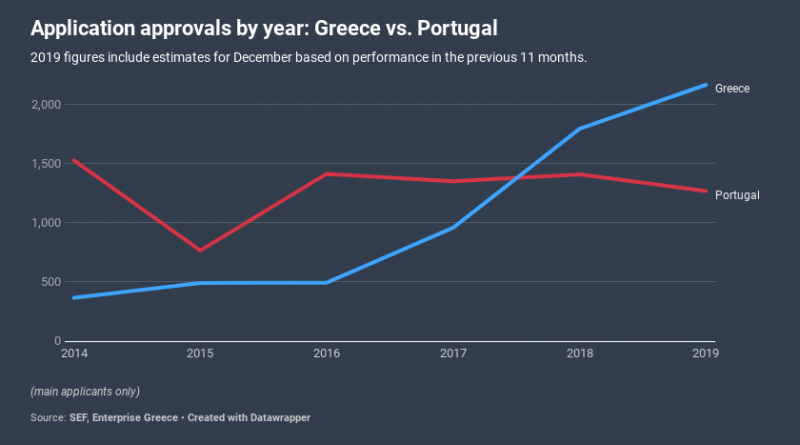 While the number of main applicants grew by 621 in Q3, program authorities had approved no fewer than 742 applications between the end of September and December 1st (in two months, that is, not even a full quarter), indicating that not only is application volume growing, but that “the rate of growth of the rate of growth” (the second derivative) is picking up speed.

682 of the 742 newly approved applications (92%) came from Chinese investors, who only two years ago made up less than 40% of the cumulative number of resident investors. Today, they account for 68% of all participants in the program since its beginning in 2013.

At 6,044 main applicants, Greece will have raised a minimum of EUR 1.51 billion since the start, about a third of which will have come in during 2019 alone.

With a month left in the year, Greece has already surpassed the number of application approvals in all of 2018 by 11% and is poised to beat its annual record by 21% this year, presuming monthly application volumes remain relatively stable.

Greece’s residence by investment program became Europe’s most subscribed-to in 2018, approving 1,795 main applicants compared to the 1,409 approved by Portugal – its closest rival in Europe. In 2019, the Greeks will pull ahead of their Iberian competitors by more than 40%.

Greece’s new government, no doubt, deserves much of the credit. Since taking office in July, it has swiftly introduced a slew of legal amendments aimed at making Greece a more attractive destination for investment: