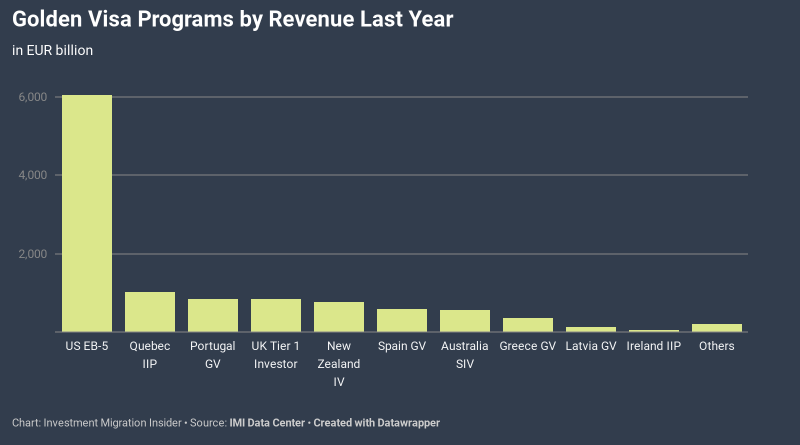 These ten programs brought in the most money to their respective countries last year. One program alone made up more than half the market.

A note on the figures

While average investment amounts, particularly in real-estate based programs, often exceed the minimum we have, to make estimates fair across programs, assumed that each main applicant invests precisely the minimum required amount.

Estimates, therefore, are simply a function of the number of approved main applicants multiplied by the minimum investment.

In the case of Australia and New Zealand, who publish statistics by fiscal year rather than by calendar year, we’ve used figures for the 2017-18 fiscal year, which ended in June 2018. For Quebec, we have assumed that investors used up all the 1,900 applications available.

The Malta Residency Visa Programme (MRVP) belongs on this list but, due to non-uniform reporting (we know the total number of approvals since inception in 2016 is about 540, but not how many of those are from 2018), we are unable to make an accurate estimate.

Tip: Should you wish to explore the statistics of individual programs in detail, each subheading links to the corresponding Program Page, where data, links, FAQs, and more are available.

The Irish IIP made a lot more the year before and stands to make a lot more this year but, owing to a variety of delays in processing, program revenue was uncharacteristically low in 2018.

The golden days of Latvia’s golden visa were 2013 and 2014 when the program issued thousands of visas annually. By 2018, however, those numbers had descended to more modest territory; 124 main applicants received golden visas in Latvia last year.

Greece has been the fastest rising European golden visa in recent years. By the end of 2017, the number of golden visa approvals had outpaced that of the preceding year by 64%; by the close of 2018, issuances had increased by a further 46%. At a much lower price point than its Mediterranean competitors, however, the program’s total revenue is still comparatively low.

Similarly to Latvia, the heyday of Australia’s SIV was a few years ago. In fiscal year 2015-16, the program saw revenues of close to AU$2.8 billion. Following a tightening of source-of-funds regulations that year, however, revenue and interest (particularly from China) quickly fell. Income for the 2017-18 fiscal year amounted to but a third of those recorded two years prior.

How can you tell Spain is an attractive destination? It has the second most popular golden visa in the EU (unless you count the UK) without even trying. While thousands of agents, promoters, and government officials, market the Portuguese, Greek, and Maltese programs, Spain has no such armada of proponents. It’s also at the high end of its price class. And still, close to 1,200 main applicants received approvals last year. If the Spanish government and ICEX – Spain’s Institute for Foreign Trade – ever decide to actively promote the program, Europe’s golden visa market will tremble.

New Zealand took a big bet when it, in 2017, doubled the price of its category 2 investor visa (it also has a category 1, priced at NZ$10 million) from NZ$1.5 million to NZ$3 million. The gamble paid off; the number of applications fell, but revenues are up considerably.

Want to know who can assist with applications to these programs? Our Residence and Citizenship by Investment Company Directory now contains more than 600 firms, sortable by a variety of criteria.

Whatever the eventual effects of Brexit end up having on the UK economy, the country’s Tier 1 Investor Visa program is better off for the decision. Application numbers during the quarter after the referendum were nearly double those of the quarter preceding it. Brexit, in fact, appears to have lifted the program’s baseline; while, prior to the plebiscite, quarterly approvals never exceeded 120 (since the price doubling in 2014), they have never fallen below that figure since.

Beating the UK Tier 1 by a nose last year, Portugal is still the European golden visa champion. In the absence of any cataclysmic events, the program’s total revenue since opening in 2012 will surpass €5 billion this year.

One of the oldest programs on this list, the Quebec IIP is also one of the most successful in terms of FDI, only limited by its self-imposed cap of 1,900 applications per annum. This year, the minimum investment amount will increase by 50%, and much excitement will be attached to the effects of that decision.

The retrogression predicament has slowed interest in the program considerably, especially among the Chinese. Fifteen years is a long time to wait for the fulfillment of the American Dream. Congress may come to solve that problem this year but, in the meantime, the USCIS is processing I-526 forms like they’re going out of style (which, in a manner of speaking, they are).

A variety of smaller residence by investment programs, notably

and others do not figure on this year’s list. Between them, they account for less than 200 million euros. The US EB-5, therefore, alone accounts for about half of the global golden visa market.

If you like statistical analysis of investment migration programs, you’ll love our Data Center.