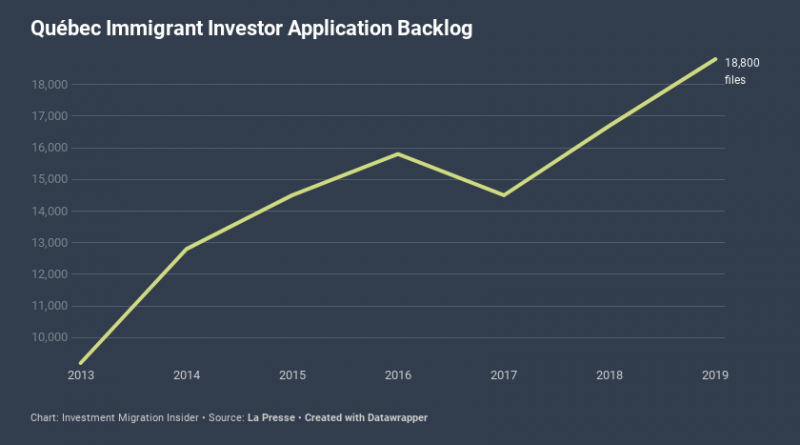 Some 18,800 main applicants have fulfilled the obligations of the program but are still waiting for their permanent residence permits. This, according to La Presse, was a driving factor in the program’s suspension last week.

Having made the requisite investment and received their Québec Selection Certificate (QSC, or CSQ in French), significant queues await applicants at the federal level. Initial processing in Québec takes up to nine months, while federal processing times in some cases exceeds two years.

The current backlog of 18,800 consists of those applicants who have been approved by Québec, but not yet by the federal authorities. At current rates, it would take Canada six years to clear the backlog, reports La Presse.

Immigration Minister Simon Jolin-Barrette held up the backlog as part of the motive for the suspension but also highlighted Québec’s low retention rate as a factor prompting the review.

Most of those investors who do obtain their federal residence permit do not remain in Québec but, instead, relocate to Toronto or Vancouver.

“The immigrant investor’s rate [of remaining in Québec] was 17%,” Jolin-Barrette pointed out. “That means that people lent $ 1.2 million to the Québec government, obtained permanent residence, but did not come to settle in Québec.”

The minister further voiced concerns about how program revenue was distributed. While the minimum required investment in five-year government bonds is CA$1.2 million, the capital outlay of most prospective applicants is, in practice, CA$300,000, which it entrusts to one of the licensed financial intermediaries. The intermediary, in turn, uses the CA$300,000 to obtain a loan for the remaining CA$900,000 and invests the total CA$1.2 million with Investissement Québec, and keeps 22% of the interest generated therefrom.

“When you look at how many millions were spent on businesses through this program, how much has been spent on revenue for financial intermediaries, they are virtually equivalent,” said Jolin-Barrette. “So it is important that the revenues associated with investments serve to help the Québec economy.”

Nuri Katz, a seasoned service provider for the QIIP, chalks the delays up to the federal government dragging its feet, for lack of incentive to do otherwise, on investment migration in general.

“Although the backlog is a significant issue, halting acceptance of new QIIP applications seems to be in line with the overall policy of the current Québec government to accept fewer immigrants in all classes,” Katz tells IMI in an email. “The Federal Government is processing QIIP PR applicants very slowly, perhaps due to the fact that the Federal Government, after scrapping its own investor program, is no longer interested in having a passive investor immigration program as part of any immigration program in Canada.”

Want to know more about the Québec IIP? To see recent articles, statistics, official links, and more, visit its Program Page. To see which firms can assist with applications to the Québec IIP, visit the Residence & Citizenship by Investment Company Directory.