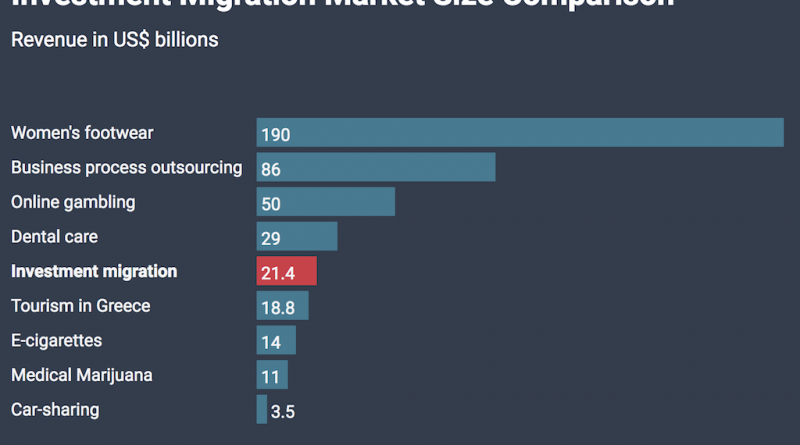 Between 2011 and 2017, revenue from investment migration programs more than tripled. The residence and citizenship by investment industry is now – conservatively estimated – a US$21.4 billion market that’s growing by 23% a year.

For a further three – Quebec IIP, Thailand Elite, and Malaysia M2H – only the figure for total individual visas issued are available. We’ve assumed a family size of three to arrive at a reasonably accurate main applicant figure.

We have not been able to find accurate main applicant figures for Ireland, Malta RVP, Singapore, Switzerland, Italy, Panama, and a slew of other, minor programs. Although technically, 77 countries and territories have some form of residence by investment scheme, the programs for which we have found figures cover at least 85% of the global application volume.

We were unable to accurately estimate revenue for Ireland, Thailand, Singapore, Switzerland, Panama, the Netherlands, Italy, Latvia the Malta RVP. Some of these programs bring in substantial amounts; Latvia, for example, raised about US$134 million from its residence by investment program in 2017; Ireland some US$300 million. All told, the programs we haven’t been able to count will have brought in somewhere between one and two billion dollars in 2017.

Still, we believe the programs for which we do have figures represent at least 80% of the global market.

The analysis indicates that, between 2011 and 2017, the amount of investment arising from these 11 programs grew from US$2.86 billion to US$12.4 billion, or an astonishing CAGR of 23.4%. At this rate, the market doubles every three years. In fact, the total revenue raised under these eleven programs has more than tripled in six years.

There are also 12 formal citizenship by investment programs, but obtaining reliable historical data on both applicant numbers and revenue is only possible for four of them – Malta, Cyprus, Grenada, and Saint Lucia – and some of the most popular ones – Saint Kitts & Nevis, and Dominica – publish no data at all.

Read also: What Difference Does a Citizenship Program Make? Comparison of CIPs’ Contribution to GDP and Govt. Revenue

We do know that Malta, in 2017-18, raised some US$480 million; Cyprus some US$1.2 billion, and Grenada US$117 million. The remaining active programs – Saint Lucia, Saint Kitts & Nevis, Antigua & Barbuda, Dominica, Jordan, Turkey, and Vanuatu (having just recently opened, Moldova and Montenegro are excluded from the analysis) – have between them attracted somewhere in the region of US$800 million to US$1.5 billion over the last year. A conservative estimate puts citizenship by investment program income (including real estate investments) at approximately US$3 billion a year.

Note that we’ve excluded from this analysis those programs in the categories Entrepreneur, Self-Employed, and Startup, and limited the scope to passive investment programs. Note also that while our analysis estimates the revenues of countries that have investment migration programs, we haven’t even attempted to estimate the earnings of the industry’s thousands of service providers, which are by no means negligible.

To sum up then, 11 of the world’s most popular residence programs raised US$12.4 billion in 2017. Applying the CAGR, they will have made about US$15.3 billion in 2018. Add to that the 20% of the market we have not been able to account for, and the global residence by investment market amounts to an annual US$18.4 billion.

Finally, including the US$3 billion-a-year citizenship by investment market, we arrive at a total investment migration market size of US$21.4 billion.

That’s a big industry. And it’s accelerating rapidly. For comparison’s sake, we’ve included in the graph below the market sizes of some other industries.

Thanks to the IMF’s article IV consultations, we know that, in 2011, Saint Kitts & Nevis and Dominica earned some US$33 million and US$10 million from citizenship by investment. Since those were the only two operational CIPs back then, the CIP market size was a paltry US$43 million, just over one percent of today’s market size for CIPs.

Combining this figure with that of the residence programs, we find that the investment migration market has grown from US$2.9 billion in 2011, to US$21.4 billion today.

Should current expansion rates persist, our relatively unknown cottage industry – as measured in revenue – will double in size every 3 years. If that happens – and that’s a big “IF” – what was until very recently considered a curious niche market will be a US$100 billion sector around 2025.