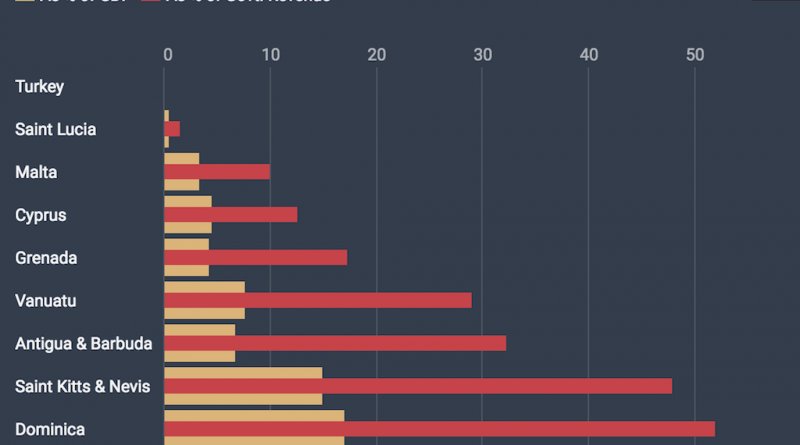 What is the relative contribution of citizenship by investment programs () to their respective economies and governments? We’ve looked at the numbers.

Using publicly available figures – either from the CIPs themselves or from third-party sources like the IMF and the World Bank – we’ve compared total CIP-related capital inflows to each jurisdiction with the GDP and government revenue in the same.

The analysis reveals that among the eight major citizenship programs – those of Malta, Cyprus, Saint Kitts & Nevis, Dominica, Antigua & Barbuda, Saint Lucia, Grenada, and Vanuatu – the relative import CBI-income has on GDP and government revenue spans the gamut from inconsequential to alpha and omega.

Keep in mind that, while the graph displays CBI-investment as a percentage of government revenue, it doesn’t mean the government actually collected that much of the total CBI-inflows. The one billion euros or so invested in Cyprus’ CIP last year, for example, accrued mostly to the private sector; to the government, it’s not a significant revenue source.

That’s not the case in Vanuatu, where no real estate option is available; While a good chunk of contributions to that program up with agents, the lion’s share flows directly to the treasury. The Pacific island nation’s Ministry of Finance and Treasury recently published figures revealing that citizenship by investment as a share of government revenue had jumped from 13 2016 to a remarkable 29% last year.

In Turkey, a US$ 850 billion-a-year economy, where the government recently reported their CIP had raised some US$100 million in the first few months since its price-reduction, CBI-revenue doesn’t even show up on the radar.

Contrast that with Dominica, struck down by twin hurricanes in late 2017, where more than half of government revenue, according to Prime Minister Roosevelt Skerrit, is directly attributable to citizenship by investment.

While Malta’s Individual Investor Programme has certainly been instrumental in balancing that country’s budget, the Mediterranean Tiger economy has plenty of other legs on which to stand, and would still be among Europe’s fastest-growing economies even without their CIP.

See:Malta IIP Passes €1bn in Revenue, Has Turned Down €250m Due to High Rejection Rates

Saint Kitts & Nevis’ Citizenship by Investment Unit has steadfastly declined to publish any type of statistics on its program (head of the CIU, Les Khan, considers it a trade secret).

Because it’s not uncommon for CIP-jurisdictions to keep such data private, those who follow the industry tend to rely on third-party sources like the IMF’s Article IV consultations to obtain CBI-revenue figures. Unfortunately, the government of Saint Kitts & Nevis has blocked the publication of this year’s Article IV report. Conservative estimates put CBI-revenue figures for 2018 at around US$120,000, about 48% of overall government revenues. The actual figure may well be far above that.

Antigua & Barbuda recently saw its program return from the doldrums into which it had plunged in late 2017 following the price cuts of its neighbors. Now back from the brink with a vengeance, Prime Minister Gaston Browne reported in his annual budget address last month that the program had raised some US$100 million in 2018.