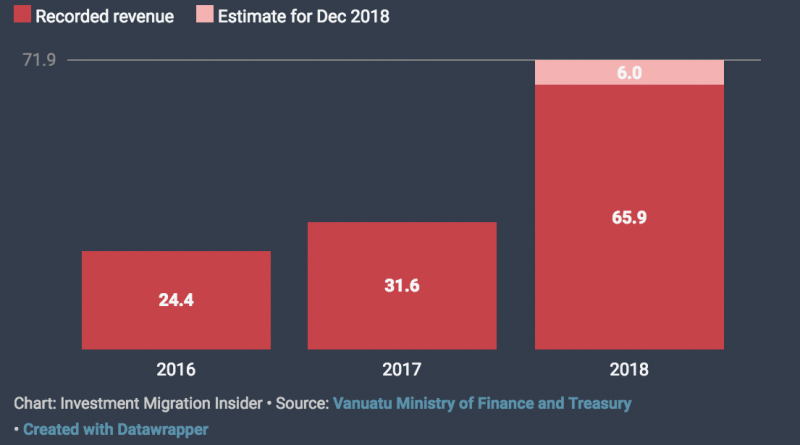 Vanuatu’s two citizenship programs brought the government revenues amounting to some US$72 million in 2018. That’s more than double the 2017 figure, and three times greater than that of 2016. Citizenship by investment now accounts for 29% of government revenue.

According to Vanuatu’s Ministry of Finance and Treasury, the Vanuatu Contribution Programme (VCP) and the Vanuatu Development Support Programme (VDSP) had together added VUV 7.3 billion (about USD$66 million) by the end of November 2018, or about US$ 6 million a month. Assuming a constant trend for the year, 2018 as a whole will have seen a capital influx in the region of US$72 million.

Related: Why Does Vanuatu Have Several CIPs? And What do They Really Cost?

The figure compares favorably to the government’s own budget – the VUV 7.3 billion is 245% above the target set last year – and also represents a hefty improvement on previous years; in 2017 and 2016, government revenue from citizenship by investment programs amounted to, respectively, VUV 3.5 billion (US$31.6 million) and VUV 2.7 billion (USD$24.4 million).

Growth in the share of overall government revenue has been equally prodigious; whereas in 2016 and 2017 CBI-income accounted for 13% and 16% of government income, that share had grown to 29% by the end of November 2018.