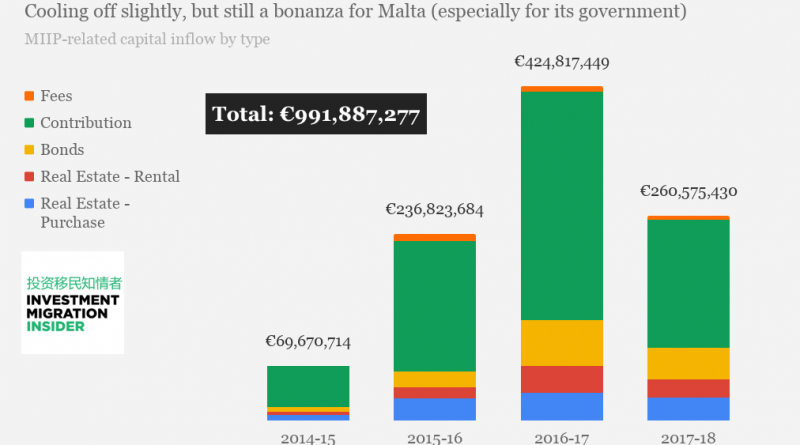 Malta’s Office of the Regulator of the Individual Investor Programme (ORiip) today published its fifth annual report on the country’s citizenship by investment program. All told, the MIIP has now raised more than one billion euros since inception and could have made at least €250 more, were it not for its exceptionally high rates of rejection.

Overall, revenues are down 39% on the preceding year.

Some 62% of applicants were of European origin – by the broadest definition of that term – while Asians made up about a third of applications and constitute the fastest growing contingent of investors in the program.

While raising a billion euros, the MIIP has rejected nearly a quarter of all applicants, passing up on a quarter of a billion (likely more) of FDI, a hefty but probably necessary price to pay for integrity.

During the same period, 266 applicants and 648 of their dependents reached the naturalizations stage. Since inception, nearly three thousand applicants have obtained Maltese citizenship.

MIIP applicants bought 30 million euros worth of real estate during the period, bringing total property investment under the program to slightly more than €100 million.

On average, they spent close to €1.2 million, more three times the required minimum.

The share of participants choosing to purchase rather than lease property, however, has dropped precipitously over the last two years, from one in five to less than one in ten.

Of note is that applicants’ preference for renting over investing shows a remarkably close negative correlation with the proportion of female applicants, which has grown from 8% in 2015 to 21% today.

The number of service providers now licensed to submit applications has grown steadily since the beginning and currently stands at 159.