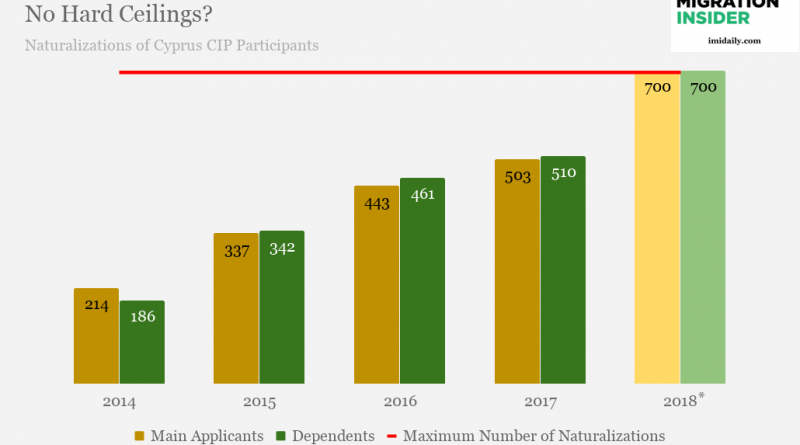 In the first seven months of 2018, Cyprus had already received 521 applications for citizenship by investment. Unless it rejects an unusually large number of investors, the country will hit its self-imposed naturalization ceiling very soon.

In 2017, the program’s busiest year so far, Cyprus naturalized 503 main applicants and 510 dependents under the program. While naturalization data for 2018 has yet to be published, the Interior Ministry has revealed that, between January and the beginning of August 2018, the program had received 521 applications. The Ministry made the revelation in a document seen by the Cyprus Mail.

Presuming a steady trend for the year, and a rejection rate of 15% (CIP rejection rates typically fluctuate between 5% and 25%, and Cyprus is actually more likely to be closer to the lower end of that spectrum), the figures indicate the number of naturalizations will reach and perhaps surpass the country’s self-imposed annual maximum of 700 main applicants in 2018. Should it come to pass, it would give rise to a backlog, a phenomenon well known to by investment programs but one which has no precedent among citizenship

Just five firms account for one in three applications submitted

In the same document, the Ministry revealed that five prolific companies filed 677 of a total 2,390 citizenship by investment applications in Cyprus between May 2013 and August 2018, accounting for nearly a third of the total, official data shows.

The 2,390 figure provided indicates only the number of applications filed, not the number of citizenships granted which, by the end of 2017, had reached 2,996 (of whom 1,497 were main applicants).

More on the Cyprus CIP: