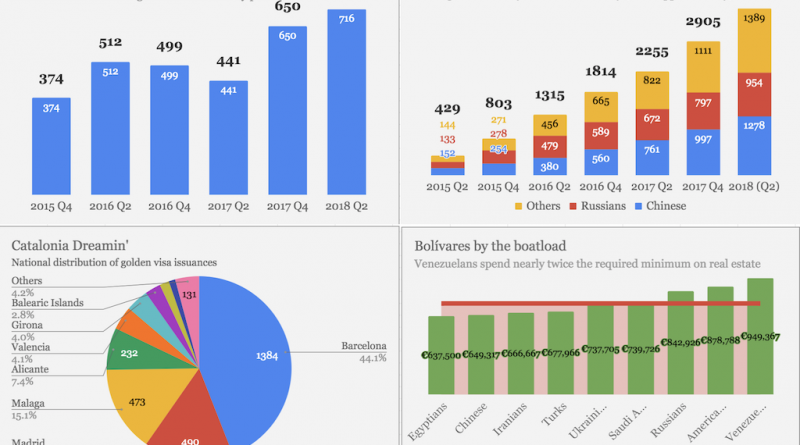 Spanish government figures reveal that the last 12 months have been – by far – the best year on record for the country’s golden visa program. The number of new visas issued to main applicants during the period saw a 45% improvement on the same period a year before.

Immigrant investors from every background spent considerably more than the required €500,000 minimum. Between July 1st, 2017 and June 30th, 2018, the golden visa program approved an unprecedented 1,366 main applicants who, on average, invested some €742,000, pushing total FDI flows from the program over the 12-month period to more than a billion euros.

Did you read this? Portugal, Spain, Greece: A Statistical Comparison of Golden Visa Rivals

While Russians and Chinese together account for some two-thirds of overall investment so far, no group of golden visa participants spends more on property than the Venezuelans; the Bolivarian diaspora shells out nearly twice the required minimum on real estate in Spain, with acquisition prices averaging €949,367, about 730 million in its five-month-old currency the Bolívar Soberano (or closer to 750 million by the time you reach the end of this article).

According to figures from the Ministry of Economy, residential purchases under the scheme are overwhelmingly concentrated at the seaside; less than 20% of the nearly €3 billion the program has raised so far ended up non-coastal cities.

The biggest golden visa program in the world: Greece Has Issued Nearly 1k Golden Visas a Month in 2018, Will Eclipse EB-5 by Year-End

Attracting some 46% of all golden visa property investment, the Catalonian cities of Barcelona and Girona received three times as many investors as the nation’s capital, Madrid, the only inland city with a significant share of golden visa investment (15.6%).

With 45% year-on-year growth, Spain is inching closer to its decelerating Iberian golden visa rival Portugal, which in 2018 issued residence permits to some 1,409 investors. Both programs, though, still lag far behind its cheaper cousin Greece, which issued 3,154 golden visas in the first nine months of 2018 alone, more than both Spain and Portugal combined.

Other stories that may interest you: