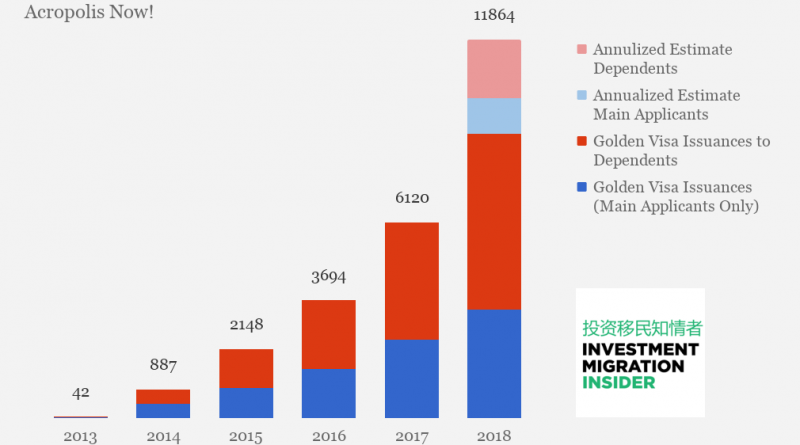 Enterprise Greece has released figures indicating that, by the end of September this year, the country had issued residence permits to 3,404 main applicants and 5,495 dependents under the golden visa program since the start of the year. That’s an average of 989 residence permits a month in 2018.

In September alone, 250 main applicants received approvals, an increase of 34% the preceding month. Since 2013, 8,843 main applicants and 13,030 dependents have obtained a grand total of 21,873 golden visa residence permits.

Presuming the current trend remains stable for the remaining three months of the year, Greece will end up granting close to 12,000 individual residence permits under the golden visa program in 2018, surpassing the US EB-5 as the most applied-to residence by investment program in the world.

Receiving 1,700 golden visas in the first 9 months of 2018 – and 179 in September alone – Chinese nationals now make up fully half of all applicants, a proportion that’s increased steadily since last year.

With 450 and 356 main applicants so far this year, respectively, Russians and Turks accounted for 13 and 10 percent of golden visa recipients.

Athens has surpassed neighboring Piraeus (27%) as the top destination for investors, issuing 29% of the country’s golden visas, while authorities in Pallini issued 18%. The three counties, which together make up the Athens Metropolitan Region, account for 74% of all permits issued so far.

While the average main investor brings 1.6 family members, Iraqi program participants stand out by including nearly twice as many dependents in their applications.