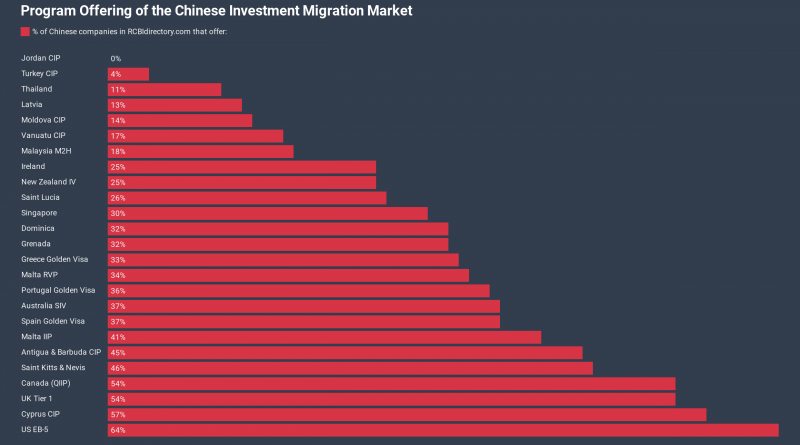 The Residence and Citizenship by Investment Company Directory contains 732 firms that offer investment migration services. 102 of these have registered offices in China. These include all of China’s 50 largest RCBI-firms and, while there are thousands of small immigration outfits in China, we believe the sample size is large enough to be representative.

We set out to determine which residence and citizenship by investment programs were most commonly offered to Chinese clients.

Our analysis reveals that the US EB-5 program, perhaps to nobody’s surprise, is the most commonly offered residence by investment program in the Chinese market. Of the 102 service providers in China, 65 (64%) offered to help with EB-5. Following closely behind, the UK Tier 1 and the Quebec IIP were both represented by 54% of companies.

Among citizenship by investment programs, Cyprus takes a clear lead, featuring on the shelves of 57% of companies in China, while Saint Kitts & Nevis (46%) and Antigua & Barbuda (45%) appeared on the websites of nearly half of the firms.

At the other end of the spectrum, no firms in China offered the Jordan CIP, and only one in 25 companies provided services for the Turkey CIP.

For more data and statistics, visit our Data Center.