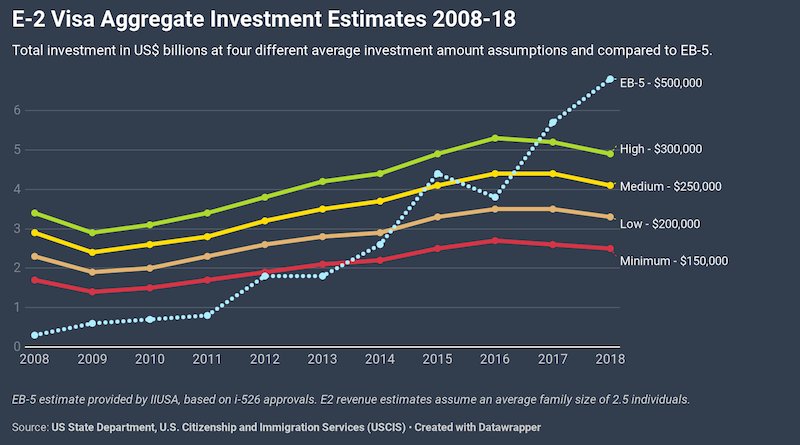 In the last ten years, 74,128 individuals have arrived in the US through the EB-5 program, while 352,076 have come on an E2 visa. In the same period, the EB-5 program has raised investments worth US$29 billion, while E2 participants – who are not subject to hard and fast investment requirements – will have invested between US$21bn and US$42bn.

In terms of source countries, Japan has been the most significant contributor of applications by some distance, accounting for around a third of all applicants during most years. Germans, the second largest contingent, have made up roughly 10% of applicants during most years in the period, while Canadians, British, French, South Koreans, Mexicans, Italians, Spaniards, and Taiwanese made up the remaining top ten source countries.

The IIUSA estimates EB-5 program revenue by multiplying the minimum (and standard) investment amount by the number of I-526 approvals. For the E2 visa, there are no explicit minimum investment amount requirements, but, unofficially, the minimum is US$150,000, while most advisors recommend at least a US$200,000 investment. Anecdotally, we know most program participants start or acquire a business with capitalizations of US$2-400,000.

Hundreds of companies can assist with applications for the E2 visas. See which ones in the Residence and Citizenship by Investment Company Directory.

Depending on the average investment assumptions for E2-businesses, then, the E2 visa brought more capital to the United States during most years in the period. Assuming an average investment of US$200,000, the program raised an aggregate of US$28 billion in the last ten years; at US$250,000, FDI worth US$35 billion; at US$300,000, more than US$42 billion.