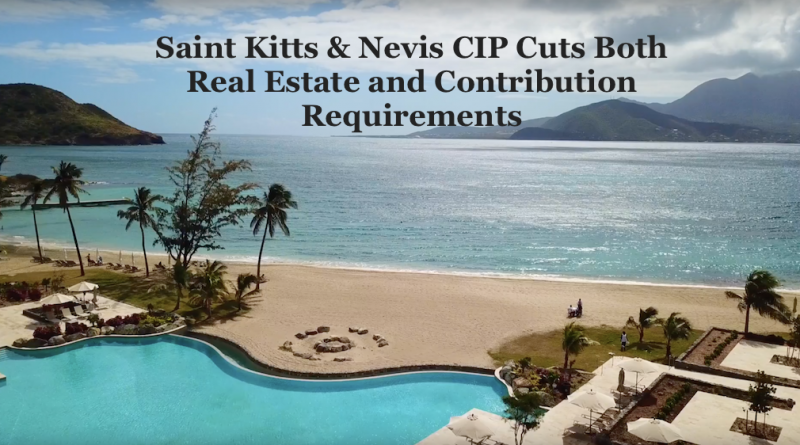 Following weeks of speculation as to where the Saint Kitts & Nevis Citizenship by Investment Programme contribution price would fall once the Hurricane Relief Fund option ends later this month, as well as a series of consultations between government and property developers discussing the relative competitiveness of the real estate investment option in the country, the Kittitian government today published substantial policy changes to both its contribution and real estate options.

According to the Saint Kitts & Nevis Information Service, Prime Minister Timothy Harris has announced the launch of a successor fund – The Sustainable Growth Fund – to replace the Hurricane Relief Fund, in addition to a considerable reduction in the real estate investment requirement.

“A new fund to be called the Sustainable Growth Fund will be launched. The new fund will invest in sustainable areas benefitting every citizen and resident of St Kitts and Nevis, for example: healthcare, education, alternative energy, heritage, infrastructure, tourism and culture, climate change and resilience, and the promotion of indigenous entrepreneurship,” remarked Kittitian Prime Minister Harris in a press release.

“The Sustainable Growth Fund for a single applicant will require a contribution of US$150,000, inclusive of Government fees. The contribution for a family of up to four will be US$195,000 following incremental steps. We think this is attractive and sustainable,” said Harris.

The change puts Saint Kitts & Nevis – whose Sugar Industry Diversification Fund contribution option had been 2.5x higher than that of Dominica, Saint Lucia, and Antigua, and US$50,000 above Grenada – on par with prices elsewhere in the Caribbean and, crucially, not below prevailing market rates.

Speaking of the revised real estate investment requirements, Harris stated that “we will retain the existing real estate investment option at US$400,000, plus US$75,000 in Government fees. This investment can still be resold after five years. However, in order to attract luxury resort developments, there is now being proposed another option where real estate offering that requires a US$400,000 investment may attract two applicants at US$200,000 each plus government fees but this can only be resold after 7 years. We have given favourable consideration to the recommendation by real estate developers for existing developments to qualify for inclusion in the new option.”

Industry observers will now be watching the real estate investment requirement in Antigua & Barbuda, where pressure on the government from developers is surely mounting as they find themselves alone at the top of the market, priced substantially higher than its competitors on other islands.

Responding to the revised policy announcement, Range Developments – a company engaged in four separate CIP-qualified projects in the Caribbean, two of which are in Saint Kitts – applauded the government’s decision, saying it would encourage investment and job creation in the country.

“As the developers of the recently opened Park Hyatt St Kitts, and the newly launched Six Senses St Kitts, we think this is a very positive step,” said Mohammed Asaria, founder of Range Developments. “It will help bring jobs and investment to the country, and I would like to acknowledge the leadership of Dr Timothy Harris and all his team who have worked so hard to understand the market conditions and create a favourable environment that benefits everybody.”

Read also: “We Have Lost Billions” By Not Having a CIP Says Saint Vincent Opposition

Putting in perspective the tangible effects this policy change would have on employment opportunities in Saint Kitts & Nevis, Range’s Executive Vice Chairman pointed to the labor-intensive nature of luxury resort projects.

“During construction of the Park Hyatt we were contributing half of all the construction wages on the island,” said Asaria. “We created more than 800 jobs, and now the Park Hyatt directly employs about 500 people and benefits many other people in the economic chain. The Six Senses St Kitts will have a similar beneficial outcome, and it is particularly good because those jobs will be in the north of the island, an area where traditionally employment has been more scarce.”

“Great strides have been made to make processing more efficient, enhancing good governance, and insisting on high standards of due diligence. This success was endorsed by the 2018 Passport Index of Henley & Partners, which ranked the country’s programme as number one in the region,” the statement said.

Read also: 20% of Antigua’s 2017 GDP Came From Citizenship Program, According to Prime Minister