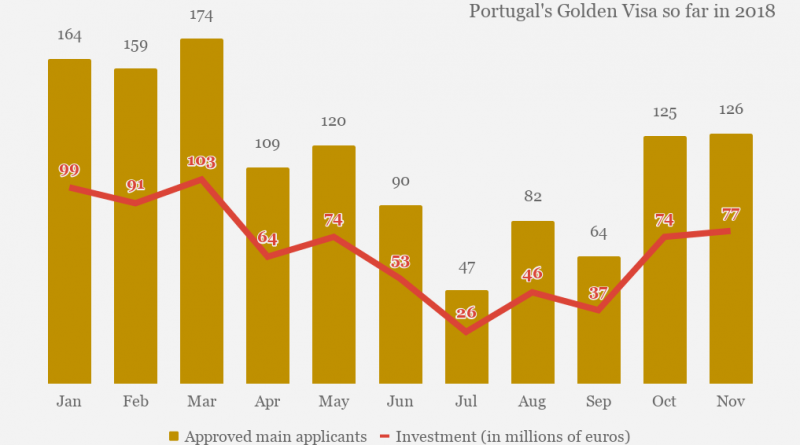 Statistics from Portugal’s Borders and Immigration Service shows the country’s golden visa program raised FDI worth €77 million from 126 investors in November, a slight improvement on the month before and 30% more than during the same month last year.

Read also: Opinion: Why Portugal, Objectively Speaking, Has the Best Golden Visa in the World

After a roaring 2014, followed by a crisis-stricken 2015, the last three years have seen application volumes stabilize at around 1,400 annual applications, even in the face of increasingly stiff competition from golden visa programs in neighboring countries.

Investors’ preference for real estate has remained steady over time, with only one in ten opting for alternative asset classes.

Whether the phenomenon is causal or merely correlative, the growing capital injections from the golden visa program has coincided with an equally steep rise in Portuguese home prices.

Chinese nationals, who three years ago made up four-fifths of all applicants, accounted for only 40% of investors in November. But interest from China has been on an upward trend since the summer; application numbers from Chinese in November have more than tripled since September. Cumulatively, they now constitute 59% of all applicants since the program’s beginning.

In November, 14% golden visa recipients were Brazilian, 12% were Turkish, while Russians and South Africans made up 4% and 2.5%, respectively.

Similar stories on golden visa programs you may enjoy: