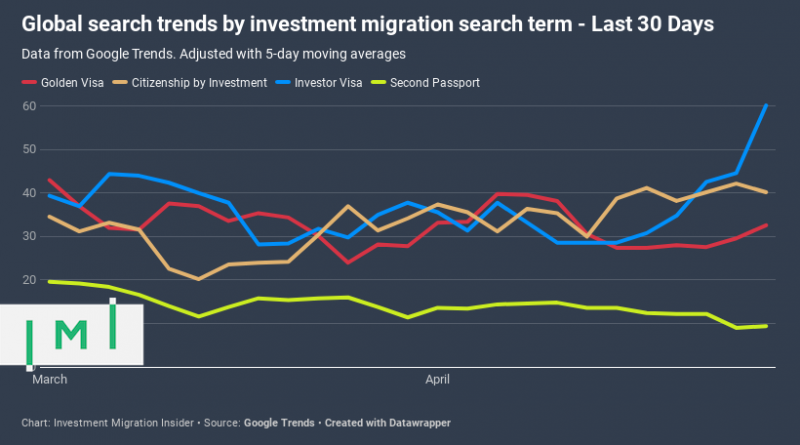 What can Google search trends tell us about how the pandemic is affecting demand for investment migration, and which programs will win and lose after it’s over?

We’ve used Google’s Trends tool to run a variety of analyses to discover how search interest in investment migration categories and specific programs have changed in the last 90 days, as well as which trajectories they have taken in the last 30 days.

Across the board, fewer people are googling investment migration topics. Queries for the term “golden visa” dropped precipitously starting already in February. The most likely explanation for that observation is that February was the month that COVID-19 peaked in China, a source-market that accounts for the absolute majority of golden visa applicants. The terms “citizenship by investment”, “second passport”, and “investor visa” fell too, but not to the same extent.

Note that we have attempted to smooth out the curves by applying 10-day moving averages.

Among European residence by investment programs, the fall has been most pronounced for Portugal, an observation potentially explained by the tremendous attention the program drew in February as government officials announced it would make real estate investment in Lisbon and Porto subject to higher minimum requirements, a plan they later rushed to postpone to 2021 following a popular uproar.

Among non-European residence by investment programs, the drop in searches has been negligible, and any variation from historical trends could plausibly be attributed to the diverting of attention toward other search terms prompted by the pandemic (such as “how to boost your immune system”, for example).

There are fewer data points available for the Caribbean CIP search terms (because they contain 3-5 words rather than simple initializations like “MM2H”). Nonetheless, a clear downward trend is visible from March onward.

CIPs outside the Caribbean fared much the same in March and early April, with a modest drop in queries beginning in late February. Note, however, that certain programs have seen a resurgence in the last several weeks.

The picture is much the same in the entrepreneur/startup visa category, although the reduction in searches for those terms appear to have held up better than both those for residence and citizenship programs.

On a consolidated basis, we observe that non-European residence programs (in this case, we considered MM2H, Thailand Elite, US EB-5, and “Australian Investor Visa”) have taken the biggest relative hit from the pandemic, while search volume for both European residence programs (UK Tier 1, Portugal, Spain, Greece) and Caribbean Citizenship programs has remained stable. Entrepreneur visa search terms have rebounded over the last several weeks.

Now, before readers get too pessimistic about the medium-term, we observe, to our delight, that – when we zoom in to look at the last 30 days only – the search terms “golden visa”, “citizenship by investment”, and especially “investor visa” have seen significant improvements since the latter half of March.

Combining the data for individual program search terms, the clear winner during the same period appears to be the entrepreneur/startup visa category, while the decline in searches for other categories of investment migration has, thankfully, leveled off in recent weeks.

Coverage of the COVID-19 crisis and its effects on the investment migration market has been bountiful over the last month as contributors from all corners of the globe have written to us to share their observations and predictions regarding the pandemic.

We’ve listed most of the articles below, sorted by recency: