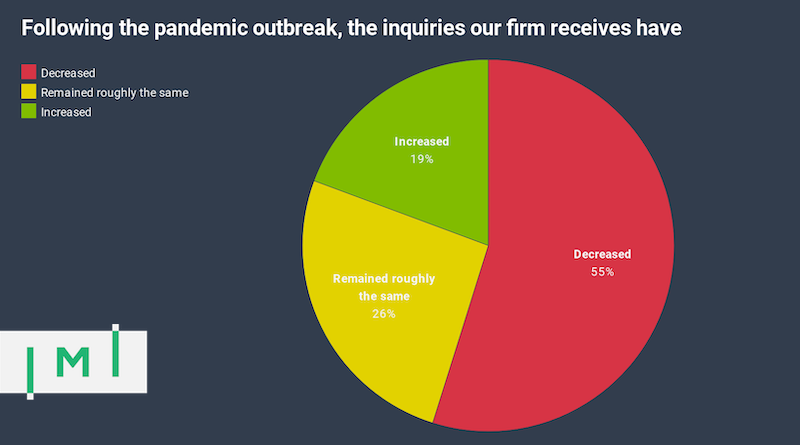 Over the last 48 hours, we’ve conducted an informal survey of 31 investment migration service providers from Europe, the Middle East, East- and Southeast Asia, as well as the Americas on how the COVID-19 pandemic is impacting the market right now, what effect they expect it to have long-term, and how they believe program authorities and governments will respond to the crisis.

The limited sample size, admittedly, wouldn’t hold up very well under peer review, so treat the results as merely indicative, rather than conclusive. Nonetheless, the geographic diversity of respondents provides valid indicia that, while not perfectly representative of the market, render a directionally accurate picture of overall perceptions.

In the short-term, however, the empirical observations of service providers painted a different picture. More than half said inquiries had fallen, while only one in five indicated inquiries in the here-and-now had grown.

We’ve discussed previously the question of what impact the pandemic would have on real estate prices, and the knock-on effects this would have on the relative attractiveness of RCBI real estate. See: Will The Covid/Economic Crisis Make RCBI Real Estate More Attractive?

Whether the pandemic, in the final analysis, harms or boosts demand, the difference in natures of RCBI programs likely means that programs will be asymmetrically affected. We, therefore, asked respondents to indicate which programs they anticipated would see the biggest gains and losses (relative to other programs) following the pandemic.

As borders closed across the world over the last month, most countries tended to make exceptions for citizens and residents, while barring everyone else from entering, whether or not they had visa-free access.

Many questioned the true value of (nominally) visa-free access as circumstances revealed such privileges could not be relied upon during the time when they were most need and have posited that those programs that grant freedom of movement within larger countries would become more prized.

Survey responses, however, were not entirely consistent with that hypothesis. While the plurality of those surveyed pegged residence programs within the EU as the most likely to benefit, in relative terms, from the crisis, they also indicated the residence programs of Canada and the US (both large countries) would be disadvantaged by the crisis to the same extent as mini-state CIPs.

This inconsistency is perhaps partly explained by the observation that nearly four out of five service providers felt confident that visa-restrictions would return to their pre-pandemic state before too long.

While respondents expected mobility patterns to return to normal in the medium term, about half anticipated that smaller CIP countries, many of which rely on tourism revenue, would resort to price cuts in their programs to soften the economic blow in the short term. Only 4% felt confident they would not.

More on how the pandemic is affecting the investment migration market: