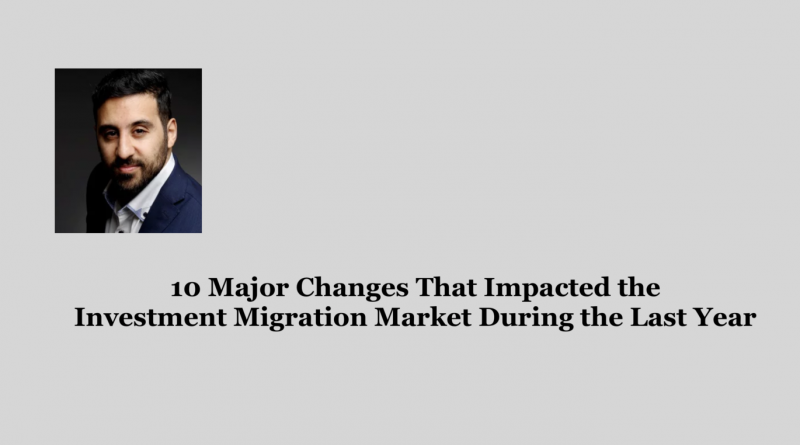 This article was contributed by regular columnist Stephane Tajick.

Every year at STC, we review some of the main immigration programs catering to High Net Worth Individuals and business people. We gather detailed information on all immigration programs, but also on the permanent residency and citizenship processes themselves.  This year, we reviewed 189 programs, some of which underwent significant transformations in the last year. What follows is an overview of ten significant events that took place in the last twelve months.

For the few that might have missed it, hurricanes Irma and Maria hit the Caribbean last fall, striking Antigua & Barbuda and St Kitts & Nevis, and causing massive destruction in both Dominica and Barbuda. In the aftermath, Antigua & Barbuda decided to slash the National Development Fund-contribution in half, and now offers it at $100,000 for a single applicant instead of the previous $200,000.

Related: Hurricane Maria Leaves 15 Dead, 20 Missing in Dominica, State of Emergency Declared. How You Can Help

Similarly, St Kitts & Nevis introduced the temporary Hurricane Relief Fund with a contribution starting at $150,000, which expired at the end of March but which continued under the rebranded Sustainable Growth Fund. St Kitts & Nevis also decided to add a second real estate option of $200,000, with a holding period of seven years as opposed to the previous $400,000 for five years.

Changes have finally arrived to the Quebec Immigrant Investor program. It took two years to decide to simply change the investment minimum from CAD 800,000 to CAD 1.2m, and increase the net worth requirement to CAD 2m from CAD 1.6m. The Quebec Immigrant Entrepreneur program is still under review and is presently closed, as is the Self Employed visa. It’s expected that the program will reopen with a new set of requirements. The federal Immigrant Investor Program remains closed.

Both Turkey and Moldova announced last year the creation of citizenship by investment programs. Turkey has since reduced its real estate investment option to $300,000, down from an entirely unrealistic $1 million. Moldova, whose passport enables visa-free travel to Europe, offers three very affordable options: €100,000 donation, €250,000 for a five-year bond investment, and a €250,000 investment in real estate to be held for five years.

Jordan also launched its new CIP this year with investment requirements ranging from $1m to $2m, a program that’s seen some surprising success. Montenegro is also expected to open a program in the coming year after deciding to design its program internally.

Many of the CIP-countries of the Caribbean have been flirting with the idea of residency-by-investment programs, to tap into their considerable tax advantages to attract HNWIs. St Kitts & Nevis made the announcement last summer, but very little information has been published on the subject so far. St Lucia and Dominica also made announcements in a similar vein but, also there, regulations have yet to be published. Keep in mind that competition with British Overseas Territories in the region will be hard in that regard.

Related: Tax residency program trend: Why 3 Caribbean CIP-countries have opened them in 2 months

5. The Cayman Islands Raise Price of Certificate of Permanent Residence

Speaking of British Overseas Territories with interesting tax residency schemes, the Cayman Islands have increased their residence program’s minimum investment requirement on real estate from $1.6m to $2m. The program is one of several residence schemes offered by the Cayman Islands.

The New Zealand Immigrant Investor (1) & (2) programs have undergone a makeover. The schemes now offer permanent residency instead of temporary residence but has seen the minimum investment increase to NZD 3m for the Investor (2) and remains at NZD 10m for Investor (1).

Kazakhstan’s capital has been making waves with the inauguration of its Astana International Financial Center. Tax holidays and common law are some of the features expected to tempt businesses and HNWIs to make the AIFC their place of residence. Over the summer, the AIFC approached residence and citizenship firms to request proposals for a residency-by-investment program. The contract was awarded to Henley & Partners and should be expected to hit the shelves in the coming year. Henley also partnered with Thailand Privilege Card for the promotion of the Thai-Elite Visa program last year.

Following the worldwide trend of countries wanting to attract innovative start-ups, Portugal and Austria followed Italy, France, and others in developing its own start-up visa. In Portugal, the applicant is required to be approved by one of the authorized incubators. Like many other immigrant entrepreneur programs, there is no minimum investment requirement. Austria requires a minimum investment of €50,000 and provides a 24-month temporary residence permit.

Unbeknownst to many, France in 2009 created a special residency-by-investment program named Exceptional Economic Contribution, offering long-term residency to those investing €10m in France. The program was most likely created with the Qataris in mind and was never really meant to attract international investors. The program was suspended this year, probably due to low intake and the creation of the Innovator and Investor programs in 2016.

10. Processing times for Both Australian Residence and Citizenship Applications are Getting Out of Hand

Australia amended its citizenship law by hardening the English requirement and allowing naturalization only after a minimum of four years of permanent residency. Australia’s application processing time for citizenship has shot up from 3 months last year to 13 months this year. The investor program has seen its application processing time go from 9 months, on average, to 15 months today.

For more information download the STC database. The STC Database is an annual survey of close to 100 countries and 200 immigration programs. It’s the largest and most detailed source of information in the Residence & Citizenship industry.