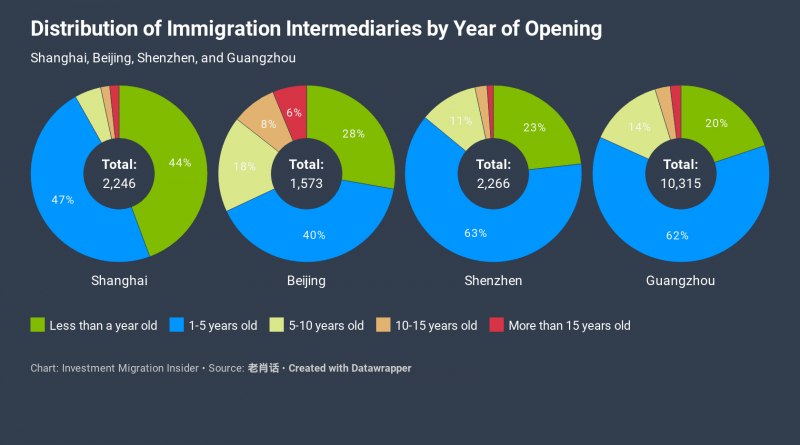 Last month, we reported on an analysis from Chinese investment migration researchers that found China has between 4,857 and 27,238 immigration intermediaries, depending on how broadly you define the term.

As explained in the previous article, the researchers devised two separate definitions; one strict, the other broad:

“If a company has the words ‘entry/exit’ (出入), ‘immigration’ (移民), or ‘go abroad’ (出国) in its name/license and is still operational,” wrote Old Sean, “we can say with close to 100% certainty that it is an immigration agent”. The original article (in Chinese) uses several pages to explain how they arrived at a strict definition.

“Within the business scope of the industrial and commercial license,” LaoXiaoHua continued, “there are companies whose names and descriptions include terms like ‘private entry and exit agencies’ (因私出入境中介), ‘citizens going abroad to settle down’ (公民出国定居), and ‘immigration consulting services’ (移民咨询服务),” writes Old Sean.

These companies, continue the authors, can legally provide immigration services and are thus included in the broad definition.

Using the broad definition, the same analysis further considered the opening years of the different immigration agencies, an exercise that revealed a deluge of company launches galvanized by the November 2018 deregulation of the investment migration industry in China.

“Imagine, something that used to cost millions to set up – and which, even then, was no sure thing – now costs only a few thousand,” writes researcher 老笑话, who prefers the English name Old Sean Immigration. “Who wouldn’t want to give it a shot?”

By the end of August this year, the number of newly minted companies in Shanghai listing immigration (or some derivative thereof) as within their scope of business had nearly reached the level of all of 2018. In Beijing, it’s already surpassed last year’s figure by a considerable margin.

Sean highlights the examples of Beijing, where two-thirds of existing firms opened fewer than five years ago, and Shanghai, where fully 91% of immigration companies are younger than five.

The researcher attributes the slower growth in Beijing to higher minimum capital requirements than in the dynamic South, as well as more pressure against what are considered “idle” establishments.

See: 57,000+ Chinese Spent More Than US$44 Billion on Golden Visas in Last Decade

Sean explains that the true number of immigration firms in China is somewhere between the strict and broad definitions.

“While the immigration business is certainly booming, there’s also the possibility that in some cities, like Changsha and Guangzhou, authorities are more strict in penalizing business they deem to be exceeding their stated scope of business.” A consequence of that, he expounds, has been a trend among firms to include in their official scope of business any type of activity they may conceivably end up engaging in, so as not to unnecessarily limit themselves.

But the high number, in any case, he says, “shows that there are at least that many companies listing immigration as a service [even if but a small or inactive part of the product line], indicating the maturity of the local market and the general recognition and acceptance of the immigration business.”

See: Cyprus CIP and US EB-5 Most Common Programs in China-Market, Analysis Shows

Where Will Investment Migration Be When the Virus-Dust Settles?

March 19, 2020 Editor Comments Off on Where Will Investment Migration Be When the Virus-Dust Settles?
Editor's Picks Europe

Citizenship Investor Fund Gives Malta Cushion Against Covid-19, But Govt. Reluctant To Use It

March 18, 2020 Editor Comments Off on Citizenship Investor Fund Gives Malta Cushion Against Covid-19, But Govt. Reluctant To Use It
Editor's Picks Europe

March 7, 2020 Editor Comments Off on 10 on The Weekend – Angie Rupert: “My Business Model is Narrow; I’ve Picked a Niche”
Ten On The Weekend

10 On The Weekend – David Lesperance: “Governments Are Increasingly Harassing the Wealthy”

February 29, 2020 Editor Comments Off on 10 On The Weekend – David Lesperance: “Governments Are Increasingly Harassing the Wealthy”

Vanuatu CIP-Revenue Surged in 2019, Nearly Half of Government Revenue in Dec.

March 5, 2020 Editor Comments Off on Vanuatu CIP-Revenue Surged in 2019, Nearly Half of Government Revenue in Dec.
Europe Intel & Data