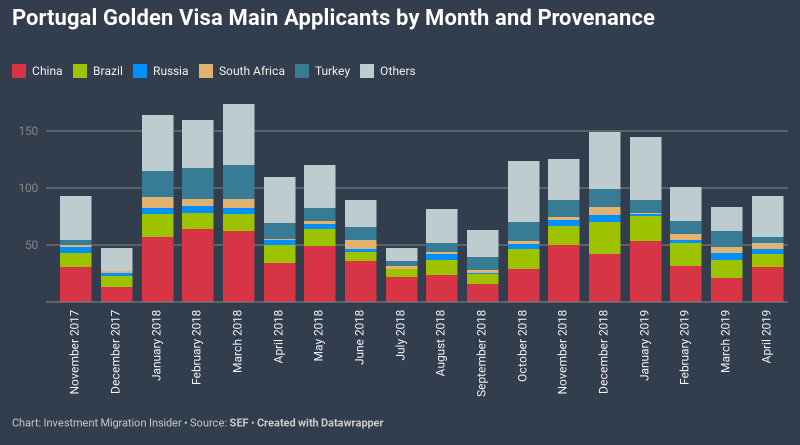 After nothing but decline in the first three months of 2019, the investment volume trend turned upward in April. In the year’s first quarter, the Golden Visa program raised EUR 249 million.

Today’s figures from Portugal’s Foreigners and Borders Service (SEF) show a slight uptick in approvals and investment for April over the month before, from 83 main applicants to 92, and an increase in the amount of capital injected by those investors, from EUR 48 million to EUR 52 million.

So far this year, the SEF has issued ARIs (golden visas) to 421 main applicants and 766 of their family members. At about a third of the total so far in 2019, Chinese nationals remain the largest single applicant constituency. Their share of overall monthly applications had declined steadily in recent years – in April 2015 they made up 78% of the total; in April 2016, 67%; in April 2017, 42%; in April 2018, 31% of the total – but now appears to have stabilized.

At 12% of the total in April, Brazilians were the second most common applicants, followed by Turks, South Africans, and Russians. Overall – in cumulative terms – Brazilians now account for 10% of all active golden visas, while the remaining top five countries constitute between 3.5% and 4.5% of the total.

Since its inception in late 2012 – the program only began in earnest in 2013 – golden visa investors have contributed just shy of EUR 4.5 billion overall, 91% of which came in the form of real estate acquisitions.

Speculation as to the program’s future has been rife in recent months following ambiguous official statements regarding the viability of golden visas as a route to Portuguese citizenship. See: Laszlo Kiss: Portuguese Foreign Minister’s Statement Does Not Bode Well For Golden Visa Route to Citizenship

Some have suggested that golden visas as a whole may be on their way out in favor of startup/entrepreneur programs, or even angel investment structures (see: Portugal’s Angel Visa: Tailor-Made for HNWIs).

On the other hand, even Portugal’s socialist government indicate the lucrative program is here to stay. See: Portuguese Government to Critics: Golden Visa Program Not Going Anywhere.