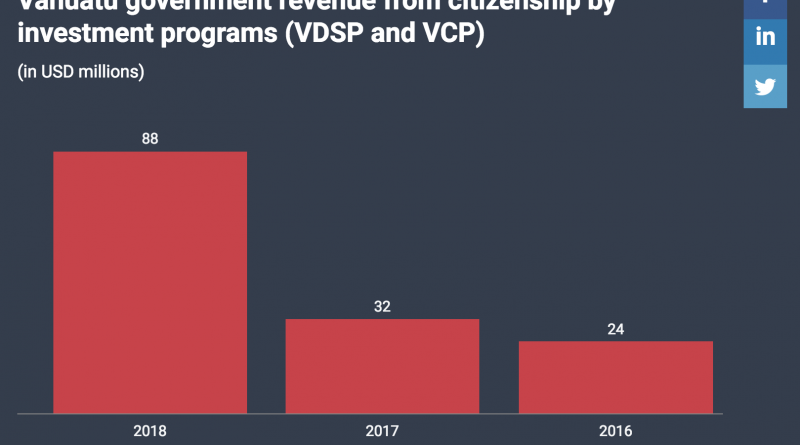 Improving intake faster than any other CBI destination, Vanuatu has seen income from its two citizenship programs triple in a single year.

Estimating the Treasury’s December figures based on the annual trend, we last month reported that Vanuatu’s revenue from citizenship by investment had increased threefold in the two years between 2016 and 2018. The recently published actual figures for December, however, show Vanuatu’s CBI-related revenues did, indeed, triple, but in one year rather than two.

According to the Vanuatu Treasury’s monthly report from December, CBI-income accounted for some VUV 10 billion (US$ 87.6 million) in 2018, exceeding the government’s own budget target by a whopping 371.5%.

The report makes no distinction between revenues from the Vanuatu Development Support Program (VDSP) and the China-exclusive Vanuatu Contribution Program (VCP).

See also: Why Does Vanuatu Have Several CIPs? And What do They Really Cost?

The windfall of 2018 means Vanuatu’s government now gets no less than 33% of its revenue from citizenship by investment. It’s also played an important role in balancing the country’s budget; in 2018, the government recorded a positive net operating balance of VT 11.3 billion (10.4% of GDP), of which CBI-funds constituted some 88%.

Last month, images of the newly issued citizenship certificates and passports of CBI-investors in 2019 showed the designation of “honorary citizenship” no longer appeared on the documents. Whether the change is merely cosmetic or the government has actually made amendments to the law, making Vanuatu CBI-participants ordinary citizens remains uncertain, as no official decrees or gazettes to that effect have been produced.