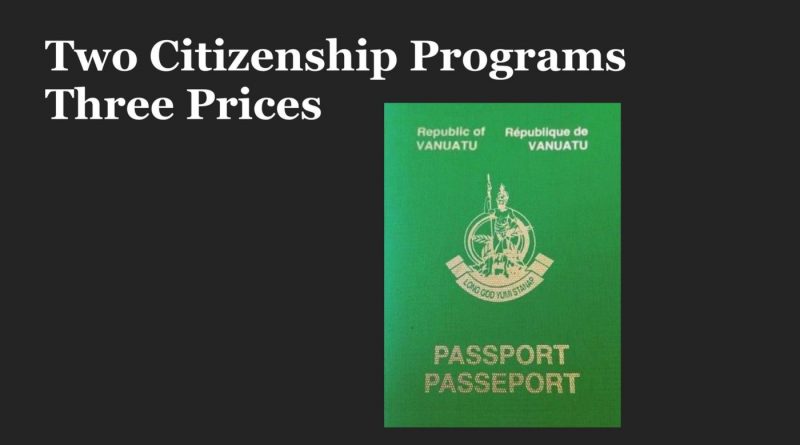 Vanuatu, an island nation in the Pacific home to some 270,000 ni-Vanuatu – the demonym used for nationals of that country – has (at least) two official citizenship by investment programs, with different terms and conditions. What’s going on?

Combined revenue from the programs accounted for 16.1% of all government revenue in 2017, or about 3.7% of the country’s GDP, according to the IMF.

The IMF, in its recent Article IV consultation, briefly explained the history of citizenship by investment in the country:

At present, the VERP and the CIIP are closed, while the VDSP and the VCP remain in operation. The REO program mentioned in the IMF’s article was “proposed by Robert Herd but has since been deregulated by a specific Parliamentary amendment,” according to one of the local accredited agents in Vanuatu with whom Investment Migration Insider has been in touch. 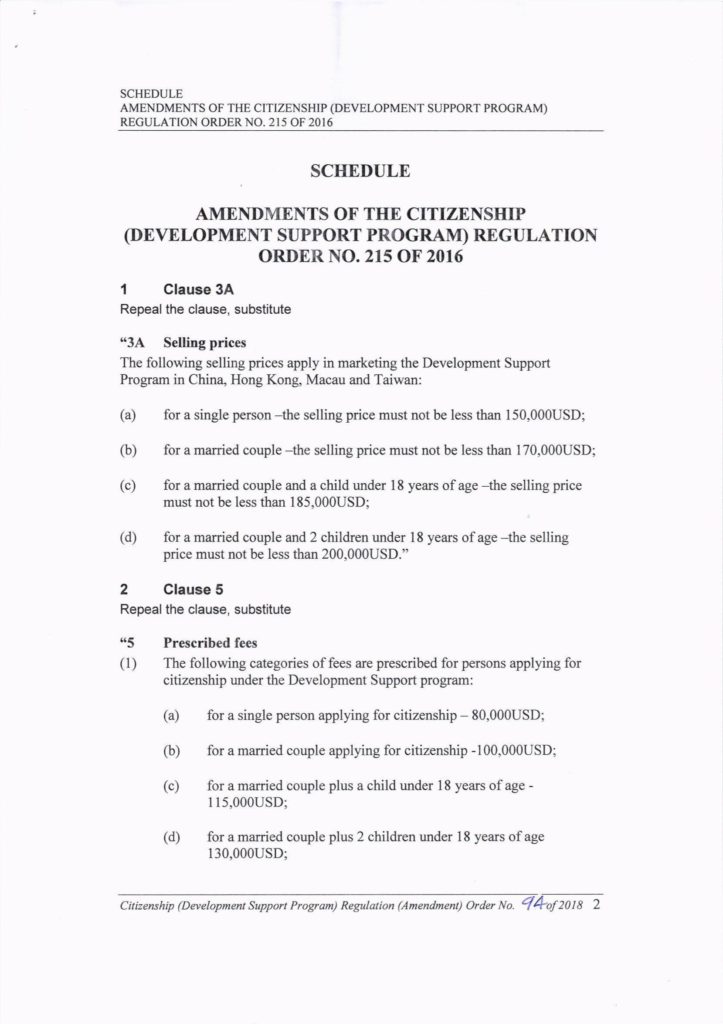 Upon closer scrutiny of the regulation, however, it became clear that this new lowered price would apply only when marketing the program in China, Hong Kong, Macau, and Taiwan.

The wording in order number 94 of 2018 (pictured) which details the pricing of the VDSP is ambiguous and raises several questions;

1. The schedule of fees includes both a “minimum selling price” and “prescribed fees”, beginning at US$150,000 and US$80,000, respectively. Why would the government ask for a contribution of only US$80,000 but then mandate that agents charge a minimum of US$150,000? In other words, why does the government order service providers to charge a US$70,000 markup when the Treasury only asks for US$80,000 for its share?

2. Why would the program be sold at a discount in Greater China and not in the rest of the world?

3. The order states that the prices apply when marketing the program in the Greater China region. What if the program isn’t marketed, but a client from, say, South Africa gets in touch with a service provider directly. Which price does he pay?

The VCP is a citizenship program (also honorary) designed just for Greater China, and just for one company. As far as we know, there is only a single international agent permitted to sell the VCP; The PRG Group of Hong Kong, which acts as a wholesaler for the rest of China, holds the monopoly and markets the program through sub-agents.

One of those sub-agents is Globe Visa, perhaps China’s largest investment migration firm. On their website, the VCP is listed as having an investment requirement of US$80,000 (down from US$130,000) – following a price change that came into effect on June 1st with the introduction of Citizenship Act [CAP 112] – Citizenship (Contribution Program) Regulation (Amendment) Order No. 95 of 2018 – in addition to Service Fees and Other Fees of unspecified amounts.

Why is there a separate citizenship by investment program for China? And why is it priced differently from the VDSP, which offers exactly the same benefits?

In an article in FiNews Asia, Managing Partner of Arton Capital Singapore, Philippe May, notes that the Vanuatu Program has some “odd” characteristics:

[…] Vanuatu’s Prime Minister has reduced the prices for «honorary citizenship» of his country: $150,000 for a single applicant and $200,000 for a married couple with children under 18 years.

They include agent and government fees – a double oddity: In the much more experienced countries of the East Caribbean donation amounts are only due after approval and paid directly to the government. Vanuatu is also the only CBI country where the government determines the fees of its agents.

Moreover the above only applies for one of two programs, the Development Support Program (DSP) and only in greater China. Another, parallel running program in place is called Vanuatu Contribution Program (VSP), has different prices and is only marketed by a single exclusive agent.

“A Domestic Race to the Bottom”

“There’s no real justification for having one program just for China and another for the rest of the world when they offer exactly the same product. And there’s certainly no justification for pricing them differently,” says James Harris via telephone from Bangkok. “How can you possibly expect anyone to sell the DSP in China when there’s a parallel program being marketed, and at a lower price?”

Harris indicates he can’t make heads or tails of the situation and says only the Citizenship Commission can answer the question as to why there need be two programs.

“We advocated throughout last year to have the price of the DSP dropped to match that of the VCP. They did drop it, alright, but then more or less instantaneously they also dropped the price of the VCP from US$130,000 to US$80,000. It doesn’t make much sense. Whereas in the Caribbean the different CIP countries are waging a price war between each other, in Vanuatu there’s a domestic race to the bottom between two competing programs, a civil price war, if you will.”