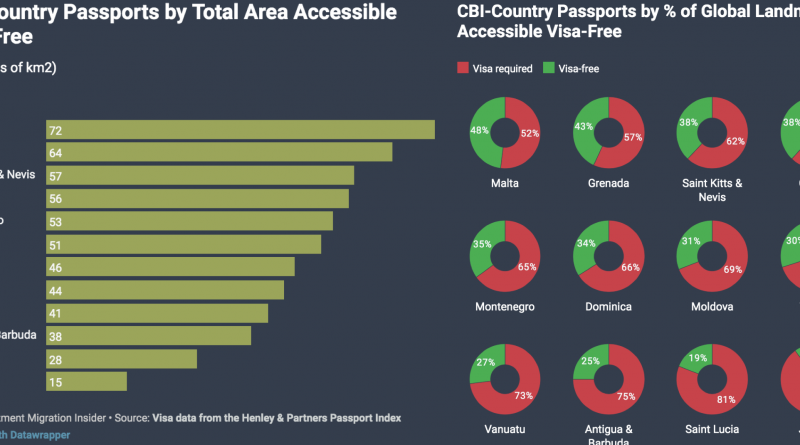 You already know which CIP-countries’ passports have the highest number of visa-free destinations. But do you know which ones have the most visa-free access when measured by square kilometers?

In crafting this overview, we’ve relied on the Henley & Partners Passport Index and their definition of “visa-free”, so if you take issue with any of the results herein presented, take it up with the creators of that index. As for measuring a country’s landmass, note that we have excluded lakes, rivers, and other bodies of water from the calculation.

The outlier countries make a big difference. Russia, with a total landmass nearly twice as great as that of countries number two and three (China and the US) is one such extreme. Visa-waiver agreements with Russia will propel a passport upwards in the ranking.

Take Vanuatu’s passport, for example, with which you can visit 28% of the world’s total area. Roughly 41% of that visitable area is thanks to Vanuatu’s visa-waiver agreement with Russia. Take it away, and the Vanuatu passport’s km2-power falls to just 16% of the world’s landmass.

Conversely, Saint Lucia – unlike its neighbors Dominica, Grenada, and Saint Kitts & Nevis – does not have visa-free travel to Russia, a shortcoming that’s keeping its km2-power at only 19% of the world’s surface area. Should Saint Lucian dignitaries have such luck at the sidelines of the next UN general assembly, Mr. Sergey Lavrov could expand the Caribbean country’s accessible area by some 40% with the stroke of a pen.

Malta doesn’t have visa-free access to Russia or China, but it’s the only CIP country with visa-free (ETA) travel to the United States. Maltese citizens are also welcome visa-free in Canada, a privilege it shares with only one other CIP-passport; Cyprus (which does not have the US).

Not far behind Malta is Grenada, which has a mutual visa-waiver agreement in place with Russia. What sets Grenada apart, not only in its own region but among CIP-countries as a whole, is its visa-free travel rights to China, an advantage stemming from decades of close diplomatic ties with Beijing.

But how has Malta edged ahead of Grenada even without a visa-waiver agreement with Russia? A big part of the answer is Australia, an enormous country that Malta is alone among CIP-jurisdictions in having access to without a visa.

Who to target for the next visa-waiver agreement? The low-hanging fruit

Saint Lucia, Vanuatu, and Moldova could make great leaps in its km2-power by simply adding Brazil to their rosters, a not unrealistic endeavor considering comparable countries like Saint Kitts & Nevis, Grenada, Dominica, and Montenegro have already done so.

Montenegro should sign with Indonesia as soon as they can; it covers 1.2% of the world’s surface area and every other CBI-country (even Jordan) has visa-free access to it. Moldovans can go to Kazakhstan (2.7 million km2) without a visa; why can’t Montenegrins?

Note that Africa alone has 12 countries (counting Mauritania) with a square area of more than a million kilometers. Visa-waiver agreements don’t always have to be a two-way street, and what possible objection could the Algerians have to more visitors from Vanuatu?

Have you explored our program pages yet? Each investment migration program has its own page with statistics, articles, FAQs, links to official websites and more. Click one of the programs on the map below to begin.