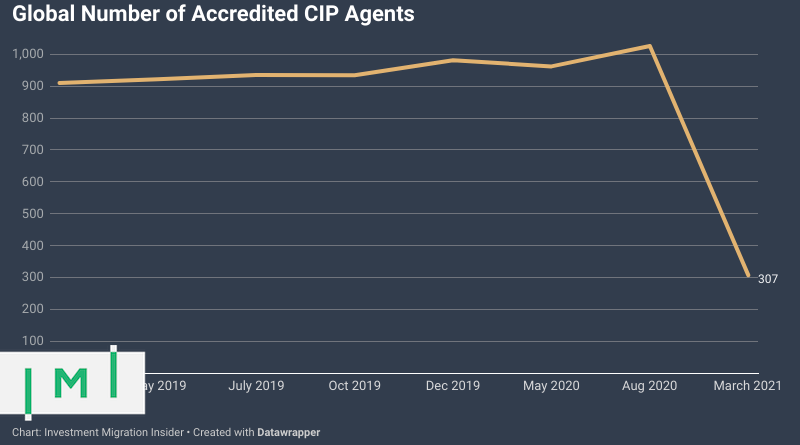 In August 2020, more than a thousand agents worldwide held a citizenship by investment accreditation. Today, that number has fallen to 307.

85% of that plunge is attributable to the permanent closure of the Cypriot CIP, which prior to November last year had the greatest number of accredited agents among all CIPs, by a considerable margin. In fact, it had more accredited agents than all other programs combined. The lamentable closure of the Moldova CIP, cut down in its prime by the vagaries of domestic politics, saw the global number of agents reduced by 9.

Malta, which has replaced its Individual Investor Programme with the (don’t-call-it-a-program) MEIN policy, decided to start its accreditation procedure from scratch through the newly established Community Malta Agency, which now manages a consolidated list of accredited agents that covers both the MEIN policy and the newly launched Malta Permanent Residency Program (which replaced the MRVP). Prior to 2020, the MIIP and MRVP maintained separate lists of accredited agents. IMI understands that none of the companies and individuals accredited under either program will be grandfathered onto the new Community Malta Agency list.

Malta’s going back to square one for accreditation resulted in a drop in the number of approved agents from 125 (under the MIIP in August 2020) to a mere 37 today. That figure, however, will surely grow prodigiously over the next few months; indeed, many household MIIP names are still not on the list, a state of affairs reportedly owing to a more rigorous and time-consuming approval process than that observed previously.

Antigua & Barbuda’s agents’ roster shrank from 33 to 31 during the period, while that of the Montenegro and Saint Lucia CIPs remained unchanged at 9 and 16, respectively. A considerable culling of the list took place in Saint Kitts & Nevis, where the number of accredited agents fell by nearly a third, from 64 to 46. This reduction notwithstanding, the country remains the world’s most accredited on a per-capita basis with some 87 approved local agents per 100,000 population, closely followed by Dominica, at 85.

Not all programs saw their agent numbers dwindle, however; Dominica’s official list grew by three names, Grenada’s by one, and Vanuatu DSP’s by four, bringing the latter to a total of 91 (up from 30 in just the last 10 months).

Note that this overview covers only those citizenship by investment programs that require a license particular to such programs; a number of CIPs, such as those of Turkey, Jordan, and Bulgaria (technically a semi-CIP) don’t issue CIP-specific licenses.

You can find an updated list with the names of each accredited agent for the above-mentioned CIPs on our Accredited Agents Lists page.