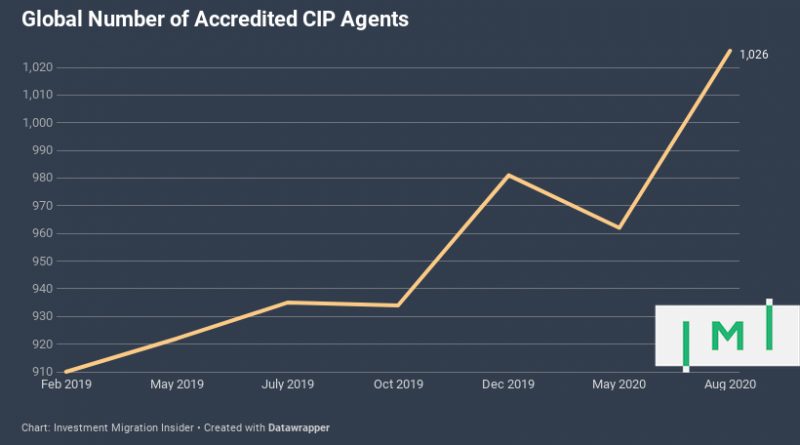 The number of agent accreditations among the ten citizenship by investment programs that require special licenses to submit applications has grown by 6.7% since May, from 962 to 1,026, according to an analysis performed by IMI.

Of the 1,026 accreditations currently valid, Cyprus alone accounts for 611, a number that has not changed during the period (although the companies that make up that number have).

The CIPs of Moldova, now suspended indefinitely, Montenegro, and Saint Kitts & Nevis saw no change to their accredited agent numbers, which remained at 9, 3, and 64, respectively. The CIPs of Antigua & Barbuda, Grenada, and Saint Lucia each added one accreditation, while Dominica saw its roster of licensees grow by six, to 57. The Malta IIP reduced its number by two, leaving it with 125 accreditations.

The Vanuatu Development Support program, however, stood out by nearly tripling its number of designated agents during the period, from 30 to 87.

“The Vanuatu Citizenship Commission moves in mysterious ways,” quips James Elcocke-Harris of the Vanuatu Investment Migration Bureau when questioned by IMI as to what gave rise to the sudden tripling. “This is just the latest in a series of surprises.”

He explains that the Citizenship Commission has, historically, followed an invite-and-cull method of accreditation; Any ni-Vanuatu citizen is welcome to apply for accreditation under the Development Support Program and, if approved, will retain that status subject to performance. “Agents must submit at least 12 applications per year or lose their accreditation,” says Harris, who also ascribes the recent rise in interest in accreditation to the rising awareness and popularity of the program over the last year.

The last time Vanuatu culled was in early 2019, when 14 out of 37 agents lost their accreditation over insufficient application submissions.

While the absolute majority of CIP agents worldwide are based in Cyprus, no country’s population is more attuned to the sector than Saint Kitts & Nevis, where more than one person in a thousand are accredited agents.

Better Due Diligence, Faster Payments: Why Are CBI Jurisdictions So Slow to Adopt Blockchain Solutions?
"It may be more of an emotional issue, rather than a technical one," says Pavel Jakovlev.