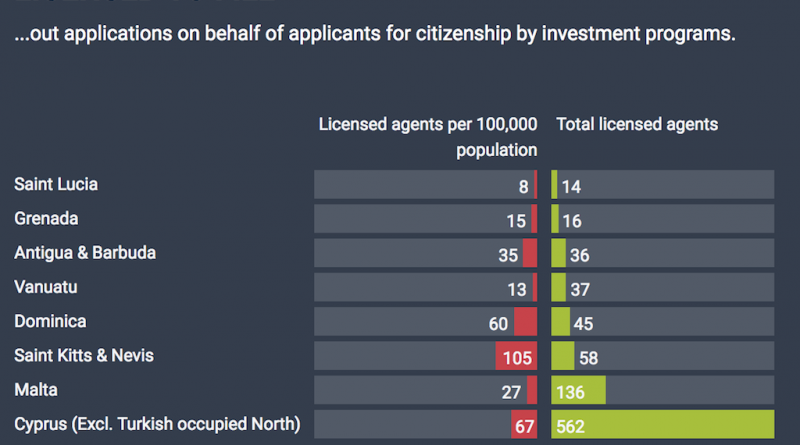 With 562 registered service providers, the Cypriot CIP has more accredited agents than all other citizenship by investment programs combined, but walk past a thousand Kittitians on the street and you’ll run into at least one licensee.

What explains this wide divergence?

One plausible explanation would be that, unlike in the Caribbean, there are no “approved” real estate developments in Cyprus (any real estate will do) and, as a result, any developer of a certain size can register as an agent and process CIP applications in-house.

See the full list of accredited agents for each program on our Accredited Agents Lists page.

A second hypothesis would be that, in Cyprus, virtually all asset classes in which an investor could conceivably be interested qualify as approved investments. This means that the Cyprus CIP attracts a panoply of service providers from widely different sectors; not only lawyers and developers, as is common elsewhere, but also auditors, tax advisors, fund managers, alternative investment advisors and so on.

While it’s true that some Caribbean jurisdictions offer more than the binary contribution-or-real estate choice, some of them also allow for business investment (Antigua & Barbuda and Saint Lucia) and government bond acquisitions (Saint Lucia), these alternatives are have considerably higher investment requirements, suppressing their demand compared to real estate or contributions.

A simpler explanation is that, with more than a million inhabitants, Cyprus is the most populous of the CIP countries (not counting Turkey, Jordan, or Moldova, who recently opened), with nearly three times the population of the second biggest CIP country, Malta. Presumably, the number of lawyers, real estate developers, and financial advisors in Cyprus is proportionally greater as well.

This theory appears to hold up well against a quick numerical analysis; adjusting for population size, Saint Kitts & Nevis, which has a 35-year history of citizenship by investment and is a country where CBI is the bread and butter for a big chunk of the population, outpaces Cyprus.