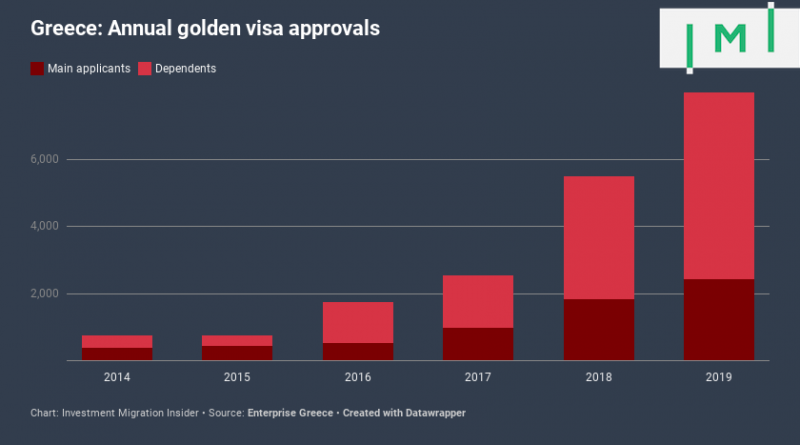 By the end of 2019, data from Enterprise Greece reveals, 6,304 main applicants and 12,312 of their family members held Greek residence permits thanks to their participation in the country’s residence by investment program.

Having already broken all European application records in 2018, there was little left for Greece to outperform in 2019 but its own past achievements. And that is precisely what Greece did; In 2019 alone, 2,412 main applicants received approvals, a number 34% greater than that of 2018 and 151% above that of 2017. Those investors, furthermore, brought with them another 5,580 family members, bringing the aggregate number of individuals now holding Greek golden visas to 18,616.

While the minimum mandated investment is EUR 250,000, lawyers and real estate agents speaking to Ekathimerini confirm that actual investment amounts are, in practice, generally EUR 300,-350,000. Presuming average investments of EUR 325,000, then, the overall FDI raised on the back of golden visas would amount to some EUR 2.05 billion.

Driving the program’s ceaseless upward trend are Chinese investors who as recently as in 2017 accounted for just a third of applicants and now make up 69% of the total. Experts speaking to Ekathimerini say they believe this ratio will continue growing throughout 2020 as well and that Chinese applicants will likely constitute some 75-80% of the total by the end of the year. The second and third largest applicant groups were Turks (8%) and Russians (6%).

The same experts commented that the rise in applications would have been even greater had it not been for the delays experienced at immigration offices in the Greater Athens region (Attica) in 2019. In October, we reported that authorities in the region would not give out new appointments due to lack of capacity, directing applicants to regional offices instead. The situation has reportedly normalized in recent months, as agents increasingly bypass the most congested offices altogether.

More about the Greek Golden Visa:

Want to know more about the Greek golden visa? To see recent articles, statistics, official links, and more, please visit its Program Page. To see which firms can assist with applications to the program, visit the Residence & Citizenship by Investment Company Directory.