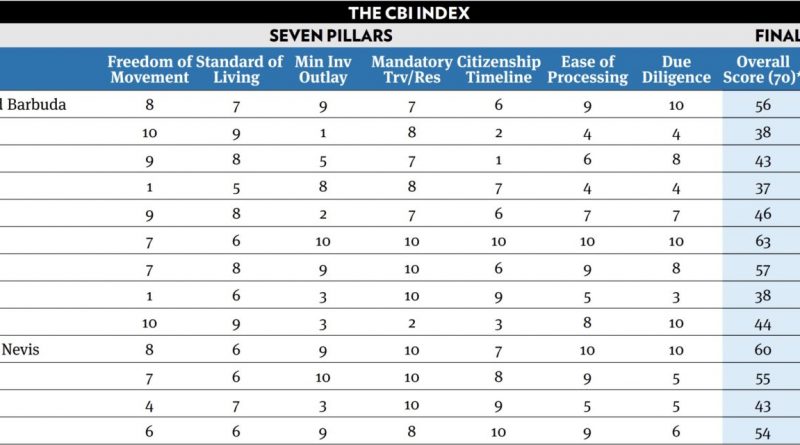 For the second year running, Dominica has ranked first on a global ranking of citizenship by investment programs.

The Citizenship by Investment Index, published by Professional Wealth Management, a subsidiary of the FT, is the product of a cooperation between independent researcher James McKay and CS Global, an investment migration consultancy.

The index rates each citizenship by investment program (CIP) from one to seven on the following metrics:

All top five spots in this year’s ranking are occupied by the Caribbean CIPs, with Dominica in pole position. The East-Indies programs are followed by Vanuatu in 6th place, with Cyprus and Malta taking 7th and 8th, respectively.

The index’ methodology has several significant shortcomings – about which we have written before – but none so glaring as this one; it does not take into account the settlement rights afforded by the respective citizenships.

This artificially skews the ranking in favor of Caribbean programs. While citizenships in Caribbean CIP-countries afford settlement rights in CARICOM-countries, a citizenship in Malta or Cyprus, by virtue of those countries’ EU memberships, grants the right to settle permanently within any of the 28 states of that union.

See also: The Passport Index-Index – An Overview of Passport Rankings

When the first edition was released last year, we pointed out to the index publisher that without including settlement rights as a criterion, the results of its findings could not be considered reliable. We are, therefore, disappointed to see that the methodology of the second edition remains unchanged from last year, which we interpret to mean that the purpose of the ranking is not to provide dependable analysis, but rather to further particular commercial interests – not that there’s anything wrong with that.