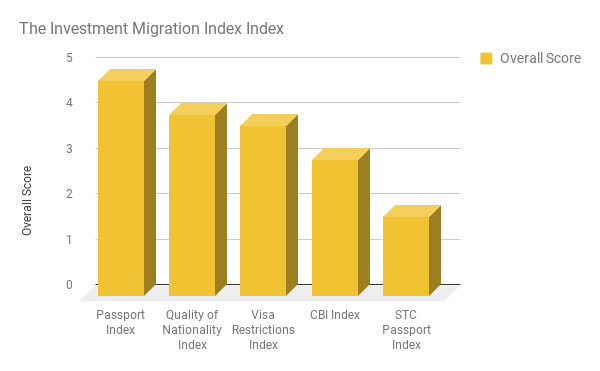 It appears every investment migration company worth their salt is publishing some form of citizenship index these days. Otherwise, who would take them seriously, right? But the quality of these indices differs widely. Some are genuinely useful and informative, others are self-serving and methodologically unsound, and others yet have, shall we say, a lot to be modest about.

Investment Migration Insider will today stand in judgment over five of these indices and try to make sense of them for the benefit of the readership.

Cited in all manner of weighty publications – The Economist, Bloomberg, FT and so on – the Henley & Partners VRI was the first of its kind and enjoyed, for many years, an unchallenged hegemony in the investment migration index arena. Published in concert with the International Air Transport Association, it’s a dependable, reputable and serious index.

But the index may have fallen victim to its own sobriety and lack of pizzazz: by design, the index is not flamboyant. It’s intended to be authoritative, not sexy. Perhaps as a result of its tremendous success in the early years and what many probably perceived to be an unassailable lead, the creators became complacent and stopped innovating. The format and content of the index changed only marginally from year to year and did not grow to include additional features. It’s not an interactive index, not something you stay around to explore for long.

The H&P VRI was our first and has always been right there, by our side, but as the years have gone by, it doesn’t tickle our fancy the way it did in days of yore. As a result, a growing number of media outlets and the inquisitive public have begun to fool around with a younger, hotter index:

Many of my former colleagues at Henley & Partners will no doubt protest that the Passport Index is a copy, although admittedly a good one, of the Visa Restrictions Index. That may have been the case initially, but Arton Capital’s Index has outgrown and outshone its older sibling. Although they will likely never acknowledge it in public, in their heart of hearts, the creators of the VRI know this to be true.

Arton Capital’s marketing department, on the whole, punches way above its weight, and few places are that more evident than in the craftsmanship and creativity that went into their Index. The PI, and the website on which it is displayed, is easy on the eyes, intuitive, captivating and functionally ingenious. It’s got panache, it’s got swagger. It’s so much more than just a list of passports – it’s treasure trove of information and includes data that can be combined in ways that output countless insights. 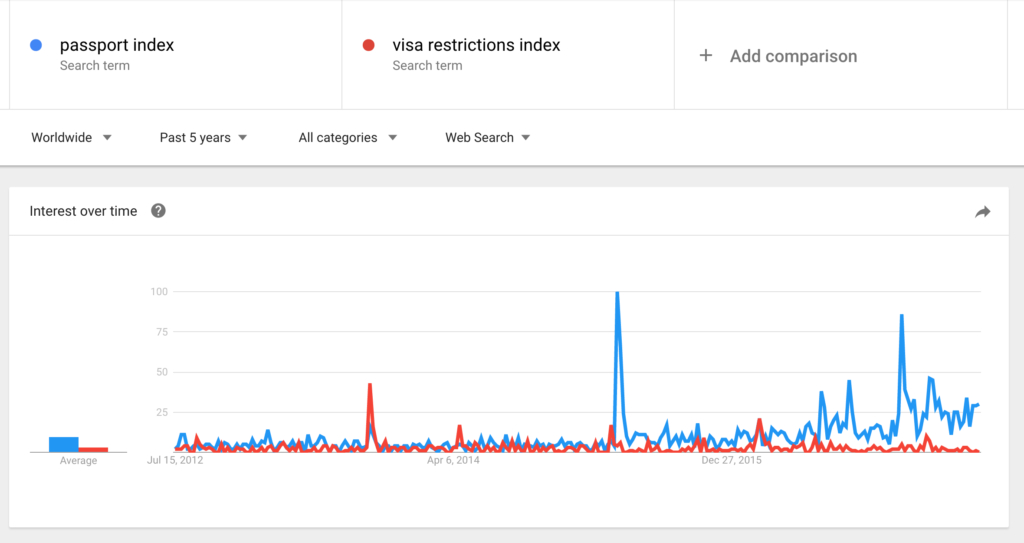 Little wonder, then, that in what seems like no time at all, the Passport Index has effectively usurped the Visa Restrictions Index and has made its way into mainstream publications and channels to an extent the VRI never did.

Through its construction and dissemination of the Passport Index, Arton Capital is rendering all companies in this industry, not just itself, a tremendous service.

It’s bringing the availability of second passports to the attention of the masses in a way that promo videos, exhibition stalls, and seminars can’t. And for that, they deserve all the qualified leads they can get.

Not content to sit idly by while H&P and Arton take up all the spotlight, CS Global recently made its first foray into the index battle scene.

Although intimately involved in the crafting of the CBI Index, CS Global cleverly opted to have it published by a third-party – PWM, a subsidiary of Financial Times, no less – presumably in a bid to give their ranking a semblance of impartiality. Judging by the rapid proliferation and eager references to the ranking, particularly in the Caribbean media, this strategy appears to be working. Piggybacking off the FT’s renown to lend gravitas to the index was a sagacious call and, from a marketing perspective, both creative and innovative.

The methodology, by contrast, leaves much to be desired. For instance, to suggest that Malta and Dominica have equally robust due diligence units (both scored 10/10) is simply not borne out by the facts, as anyone that has even a cursory acquaintance with the processes can tell you. Cambodia, Bulgaria and Austria have been included in the Index as if they had formal CBI-programs when all they actually have are legal provisions for naturalization of investors, something common to scores of countries around the globe that we, nonetheless, would not characterize as CBI-countries.

The principal methodological shortcoming of the CBI Index, in the opinion of Investment Migration Insider, is that it does not account for settlement rights. Comparing, for example, the price of Cyprus and Saint Kitts citizenships without considering the vast differences in what they offer in the way of long-term residence possibilities is comparing apples to oranges. Of course Cyprus is ten times more expensive; it offers the right to live permanently in 28 (highly desirable) countries rather than just a handful of Caribbean islands.

The CBI Index needs work, but it’s not bad for a newcomer.

This has no doubt been a labor of love for the free-spirited and erudite Professor Kochenov, and it shows. Of all the indices mentioned in this article, the QNI has, by far, the soundest methodology, the most extensive sources and documentation, and the most carefully considered weighting system.

More comprehensive and holistic than other indices, it takes into account all manner of measurements and incorporates the findings of other indices, such as the Human Development Index and the Global Peace Index. Kochenov has been exceedingly thorough in his research and design. In brief, the QNI bears the marks of a scholar accustomed to rigorous peer-review. The use of a subtle pastel color palette to display the data makes for a pleasant viewing experience.

But here’s the problem with the QNI: Hardly anybody knows about it.

In how many publications have you seen this index referenced? It was featured more than a year ago in the New Yorker, but that’s about it. It’s a shame, really, because in terms of usefulness and work quality, the QNI is absolutely top-of-the-line. The index itself is a masterpiece and may in time turn out to be Kochenov’s opus magnum, but what good is that if it’s hardly ever exposed to eyeballs? The product isn’t the problem; it’s the marketing.

If Henley & Partners want to take the fight for index pre-eminence back to Arton, their best bet is to focus on getting the word out about the QNI.

I’ve included this index primarily because, quite frankly, Stephane Tajick seems like a nice guy and I’m impressed by how much work he gets done considering he doesn’t have a big company behind him like the others do. But it’s not a very useful index because the methodology isn’t clearly explained, the metrics by which citizenships are rated are neither comprehensive nor logical (same-day travel, annual tourist arrivals and “star rating”) and not always objectively defined (what constitutes a “first world country”?).

This index gets an E for effort. It’s not useless, a lot of work went into it and it has lots of data, but the methodology isn’t up to snuff, the design looks home-made and there are too many grammatical errors and typos. If STC wishes to be taken seriously in the face of fierce competitors like Arton Capital and Henley & Partners, they’ll have to step their game up several notches.

What follows is a ranking of all these indices. I’ve given each index a score of 1-5 on four dimensions – methodology, media reach, usefulness and format/design – and compiled an overall ranking. Let’s call it the 2017 Investment Migration Index Index©. It will undoubtedly be featured in the New York Times and Wall Street Journal any day now.

To the runners-up, don’t be too hard on yourselves. Instead, let this spur you on to work even harder and reach greater heights. If you apply yourselves, who knows, maybe next year you could be the ones proudly donning that t-shirt.