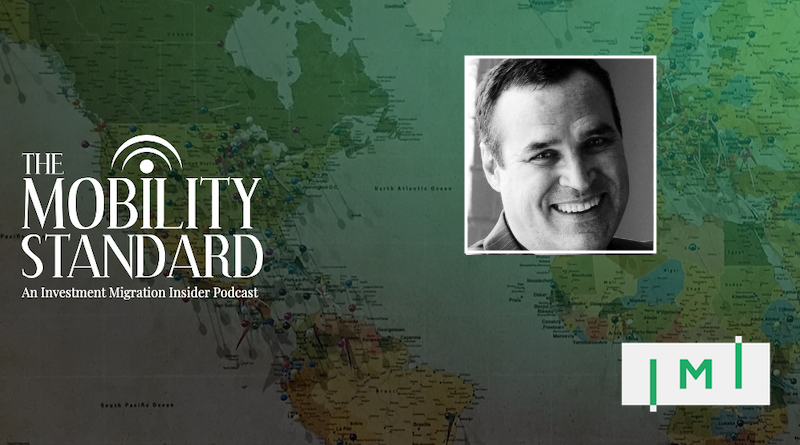 In this third episode of the Mobility Standard, we had the pleasure of hosting David Lesperance, an internationally recognized expert on what he himself calls “backup plans”, by which he means comprehensive structures aimed at protecting your person, your family, and your assets from anything from black swan events and natural disasters to avaricious politicians and criminals.

We asked David about a range of his favorite subjects including:

Below, you’ll find an excerpt of some of the more salient moments of the episode:

Questioned as to the true levels of Americans giving up their citizenship, David Lesperance offered a detailed account of the disparity between the number of Americans trying to renounce, the number that is able to, and the number of renunciations that are reported.

“You have a huge backlog,” commented Lesperance. “In fact, the US embassy in Bern is reporting they have 400 people on their waiting list to schedule appointments for renunciation. And you have to remember: That’s just one of 307 US missions abroad.”

The reported numbers don’t reflect current demand, explains Lesperance, first because there’s a 12-18 month lag between the renunciation and the publishing date of that event, and second because many US diplomatic missions downright decline to take renunciation appointments, ostensibly out of public health concerns. He estimates the true number of renunciations awaiting is in the tens of thousands, at least.

The press, he adds, were quick to attribute record renunciations in late 2016 to Trump’s election, and the even greater numbers in early 2020 to COVID, neither of which were related events.

“COVID wasn’t even a twinkle in a bat’s eye at the time those [renunciations] that were only now getting reported actually took place.”

The post-pandemic backlash against the rich

In the United States, Lesperance points out, the rich know this money will have to come from them because there is no VAT, which means the Washington is far more reliant on personal income taxes for funding than their European counterparts. With a change in the political discourse, the wealthy are seeing the writing on the wall.

“You are seeing people of means do what humans naturally want to do, which is to protect themselves and their families. And the people of means have the ability to do that better than the vast majority of the population. Governments have responded [to the pandemic] with stimulus and spending, and they’re going to need more money. […]The conversation has turned from ‘let’s get money for good stuff’ […] to ‘let’s take money from bad people’, and ‘there shouldn’t be any billionaires or pandemic profiteers’.”

Wealth taxes, he says, are but one manifestation of that, which is why we are seeing proposals for such levies in places like Mexico, the UK, the US, and even Singapore, while Argentina has already imposed one. In the episode, Lesperance discusses some of the many tools HNWIs have at their disposal to protect themselves through tax, residency, and citizenship planning.

Separate your a** from your assets

“You have to look at residency, citizenship, and domiciles as you do any other type of asset class; you look at it as a portfolio,” says Lesperance when questioned about what a “bulletproof” backup plan might look like. “You have to have assets in different jurisdictions. I, for example, have a NAFTA-asset through my Canadian citizenship, I have an EU asset [through permanent residency in Poland], I could very easily get an asset in another group, like New Zealand/Australia, or an ASEAN-country.”

But residency, citizenship, and settlement rights diversification alone are not enough, he emphasizes.

“With regards to your money, one of the things I always tell my clients is that we can separate where you are from where your money is. I call it separating your a** from your assets.”

Learn many more of Lesperance’s strategies by listening to the full episode.

More episodes of the Mobility Standard: