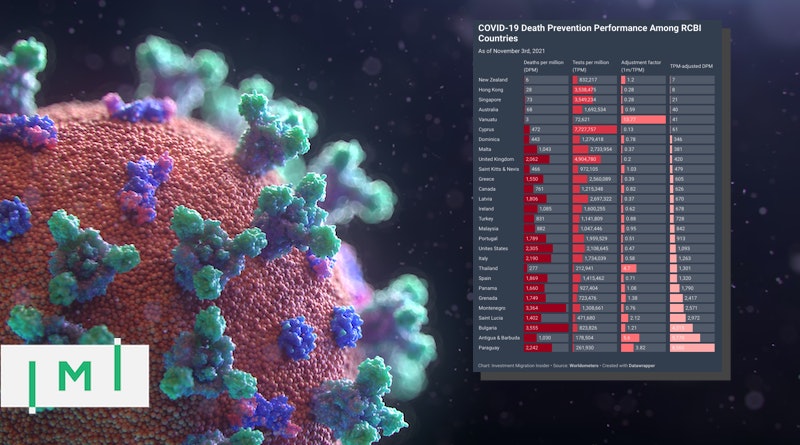 Note: This analysis considers only the respective countries’ performance in preventing COVID-deaths. Some countries have kept deaths very low, but only by severely depriving their populations of basic civil liberties. Keeping people alive is important, but so is keeping them free. This analysis does not take into consideration the degree to which a country deprived its population of freedoms during the pandemic, only the degree to which it prevented COVID-deaths.

On April 22nd last year, a little more than a year and a half ago, when most of us were a handful of weeks into what we (naïvely) thought would “bend the curve”, IMI published a numerical comparison of how various investment migration destination countries had performed in terms of preventing COVID-19 deaths and cases.

That article turned out to be an audience favorite; nearly 30,000 visitors read our analysis. We’re therefore revisiting the subject 18 months later to see which countries, with the benefit of hindsight, really did a better job of preventing deaths over a longer-term period.

What we’re changing in this year’s analysis

This year, we’ll have to update our methodology because several fundamental premises have changed: At the time of our first analysis, only 2.8 million COVID-cases had been recorded worldwide. Today, that number has swelled by nearly two orders of magnitude.

In April 2020, only a few countries had tested more than 5% of their populations. Now, most have conducted more tests than they have inhabitants. Because testing for COVID among the general population has vastly expanded, case fatality rates have fallen a great deal. COVID is not as deadly as it appeared in April 2020, when testing was still confined mostly to the symptomatic.

Over the last year and a half, we’ve also been disabused of the notion that we might actually stamp out COVID altogether; it’s now a permanent feature in the panoply of viruses that humanity has resigned itself to live alongside. Governments have generally conceded that they are no longer aiming to extinguish COVID; merely to mitigate its effects.

The number of cases is not the key performance indicator it once was because the virus now permeates society. The number of deaths, of course, remains the most important KPI. This year, consequently, we are ignoring case counts and focusing on deaths.

Moreover, we can’t just consider deaths-per-million (DPM) in isolation because countries that test more for COVID will, all else being equal, record more COVID-deaths than countries that test less. People are still dying of COVID in countries with low test rates, but they are not necessarily identified as having died of COVID-related causes.

So as not to give an unfair advantage to countries that test less, we must adjust the DPM for differences in testing frequency, i.e., Tests-per-Million (TPM). By equalizing the test rate, we can get a more accurate comparison of how well countries have done to prevent COVID-deaths.

Here’s how we do that:

What does TPM-adjusted DPM tell you?

Simply put, TPM-adjusted DPM tells you how likely a person would have been to die of COVID in each country since the pandemic started.

If a country has a TPM-adjusted DPM of 1,000, for example, it means any given person would have had a 0.1% chance of dying of COVID in that country. Of course, younger and healthier people would have an individual risk of death from COVID much lower than older or sicker people, and vice versa.

In which RCBI-countries were you least likely to die from COVID?

New Zealand has the second-lowest number of deaths-per-million, after Vanuatu. Because it has conducted 832,217 tests per million inhabitants, their TPM must be adjusted upward by just under 20% to compare their COVID-death prevention efforts to countries that are testing more. Overall, New Zealand has the lowest TPM-adjusted DPM of all countries analyzed. Those impressive COVID-death prevention scores, however, have come at the price of one of the world's sharpest reductions in individual liberties.

Note that Vanuatu has only recorded a single COVID-death, making it the winner in absolute terms. Because it has only tested a small minority of its population, however, a number of cases may have gone undetected and/or unrecorded. Its DPM is therefore adjusted upwards by a very large adjustment factor of 13.77. Consider Vanuatu an outlier.

Hong Kong has recorded 28 Covid-deaths per million residents. But because it has conducted about 3.5 times more tests than it has residents (and is therefore far more likely to have uncovered COVID-related deaths) its DPM must be adjusted downward significantly.

Best score in the Caribbean: Dominica (TPM-adjusted DPM of 346)

Dominica, despite having a tiny population that means absolute death counts are multiplied by nearly 20 to reach a DPM number, has kept its TPM-adjusted DPM at a relatively low 346.

Canada has recorded 761 deaths per million residents and has conducted 28% more tests than it has people. Its TPM-adjusted DPM of 626 makes it the best performer in the Americas, excluding the Caribbean.

Among all the countries herein considered, none have been as prolific at testing as Cyprus, which has conducted nearly eight times as many tests as it has people. Its number of recorded COVID-deaths is, therefore, likely to closely resemble its actual number of COVID-deaths. With a DPM of just 61, Cyprus has the best score in Europe, about six times better than Malta, the runner-up.

Does this analysis make sense to you? Is our method fair? Tell us what you think in the comments section on social media.

Global Number of CBI Agents Up 16% Since Cyprus Closure - Dominica Blacklists Another Firm
The global number of CBI-accredited agents is slowly recovering since the end of Cyprus' CIP. Dominica adds to its agent blacklist. 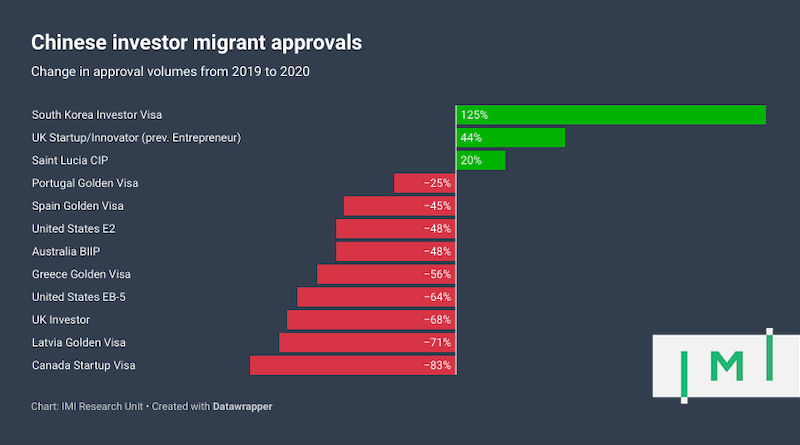 Figures Reveal Sharp Drop in Number of Chinese Investor Migrants Since 2019
It's not just you. Chinese investor migrants really ARE becoming fewer and farther between, according to the most recent data.