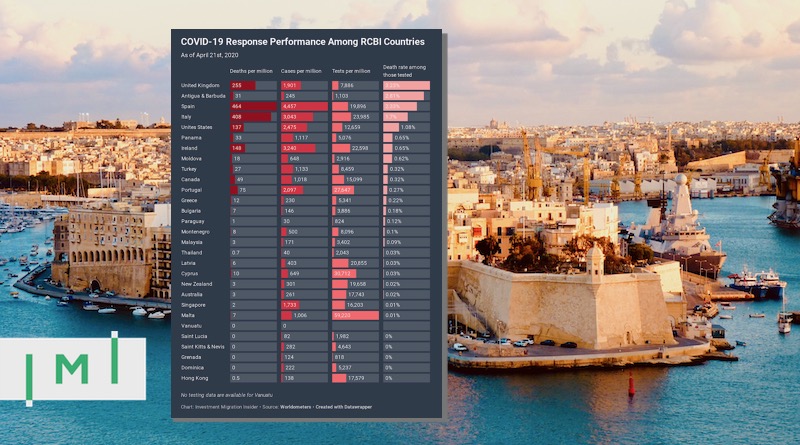 Many commentators on IMI have hypothesized that one of the points future investor migrants will factor in when deciding on a destination is how different countries coped with the pandemic. Considering strictly the measurable responses to the pandemic, we set out to compare RCBI jurisdictions on how well they are handling the pandemic so far.

How do we measure relative success in handling COVID-19?
The first two metrics to consider, naturally, are the number of infections and the number of deaths so far discovered. Since none of the most common destinations for residence and citizenship by investment are “third-world” countries, we will initially take infection data at face value but we will also modulate that by taking the comprehensiveness of testing into account where such data is available.

As a rule of thumb, the higher the tests-per-million figure, the more credible the number of cases and deaths, simply because the more you test the more cases you find.

Tests-per-million is also a good proxy for judging the preparedness and capacity of a country’s healthcare and disease control systems, which, in turn, are a good proxy for the general performance-level of public services.

Adjusting for differences in breadth of testing
To make the rankings fairer, we’ve also included comparisons on Death Rate Among Those Tested. The fewer people a country tests, the fewer deaths and infections attributable to COVID-19 will be discovered. In the absence of a deaths-per-tested comparison, those countries that have done the best job of extensive testing would appear to have done a relatively worse job of minimizing cases and deaths.

See also: Asaria: 6 Characteristics of Citizenship by Investment in the New World Order

While the infection and death rate among those tested is the same for both countries (20% and 5%), cases-per-million and deaths per million in Country A would look twice as bad as in Country B. So as not to give an unfair advantage to countries that test more people, we present a deaths-per-tested ratio as well.

A real-world example: Antigua & Barbuda, at 31 deaths per million, looks like they have twice as good a grip on the situation as Portugal, which has 75 deaths per million. But Portugal has clearly discovered a far greater share of the COVID infections in their country than Antigua because the tests-per-million figure in Portugal is 27 times greater than that of Antigua. The key number to watch, therefore, is the deaths-per-tested ratio.

An even fairer comparison would also adjust the comparison to account for the number of those tested who turn out positive because a higher number of positives per thousand tests indicates testing is concentrated on those groups showing symptoms and those considered vulnerable.

Vanuatu is the only country on our list that have yet to record a single case of COVID-19 and, consequently, no deaths either. But we must note here that, although we know Vanuatu is testing, we have seen no official test figures for the country, which means there is a possibility that the virus is spreading undetected over a lack of testing. Having closed its borders early, however, there is a good chance the country will remain virus-free for a long time.

Similarly, four Caribbean countries – Dominica, Saint Kitts & Nevis, Saint Lucia, and Grenada – while having detected a number of cases, have recorded no deaths. As in Vanuatu, there is good reason to believe there are large numbers of undetected cases, as testing has not been comprehensive. It would, therefore, be premature to declare the Caribbean countries “winners” of pandemic response.

Clearly, being an island and having a small population makes disease control much easier. You can test a greater share of your population more rapidly, and you are literally insulated from the rest of the world, which makes keeping track of the comings and goings at the border much easier.

In terms of testing, Malta appears to have done the best job, having already tested about 1 in 20 inhabitants. Worldwide, only three countries – Iceland, Faroe Islands, and the UAE – all but one of which have considerably smaller populations than Malta, have tested a greater share of their populations. Furthermore, only one in ten thousand of those tested have died, another great achievement.

Of course, we must point out here that as a country begins to test ever more widely, the death rates will fall. That happens because a greater share of the general population – as opposed to the symptomatic population – is being tested, lowering the chance that each subsequent test will result in a positive. And Malta, thanks to its commendable efforts, have tested a greater share of its general population, resulting in a much lower deaths-per-tested rate. Yes, its deaths per million – at 0.01% – is higher than that of four Caribbean countries and Vanuatu. But those countries have, combined, barely tested a thousand people, while Malta has tested more than 26,000.

While we can only judge the true performance of responses to COVID-19 once a large enough representative sample of each population has been tested – many months, possibly years in the future – Malta is clearly setting an example for others to follow.