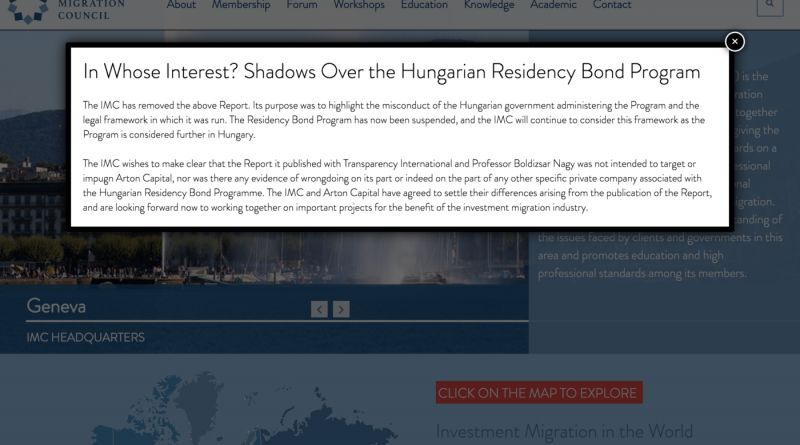 The Investment Migration Council (IMC) has issued a statement in which they make clear that they have reconciled their differences with Arton Capital – stemming from the publishing of a 2016 report on the Hungarian Bond Residency Program – and will henceforth work together with Arton on projects that will benefit the investment migration industry.

The report in question – “In Whose Interest? Shadows Over the Hungarian Bond Residency Program” – which the IMC published in cooperation with Transparency International, took a very critical view of the Hungarian Residency Bond Program, drawing attention to what it called misconduct in the government’s management of the program.

The report also pointed to irregularities in the process by which Hungarian authorities allocated the program’s concessions to private agents – of which Arton Capital was one – which sparked a considerable dispute and cold-front between the investment migration consultancy and the industry association, culminating last year in a somewhat perplexing legal motion; Arton Capital, at the time, issued a press release stating the firm had filed a defamation suit against the IMC in a UAE-court; the IMC, on its side, indicated they had never received any notification of such litigation. In any case, the dispute now appears to have been resolved privately.

Many third-party observers have long considered the conflict unnecessary, divisive, and deleterious to the investment migration industry’s public image.

In a welcome development, it now appears the two parties are finally burying the hatchet.

“The IMC has decided to remove the above report. Its purpose was to highlight the misconduct of the Hungarian government administering the program and the legal framework in which it was run. The Residency Bond Program has now been suspended, and the IMC will continue to consider this framework as the program is considered further in Hungary,” said the joint statement.

“The IMC wishes to make clear that the report it published with Transparency International and Professor Boldizsar Nagy was not intended to target or impugn Arton Capital, nor was there any evidence of wrongdoing on its part or, indeed, on the part of any other specific private company associated with the Hungarian Bond Residency Program,” the statement continued.

Investment Migration Insider has learned that the détente came as a result of a longer period of direct talks between the IMC’s board and Arton.

“The IMC and Arton Capital have agreed to settle their differences arising from the publication of the report and are now looking forward to working together on important projects for the benefit of the investment migration industry.”