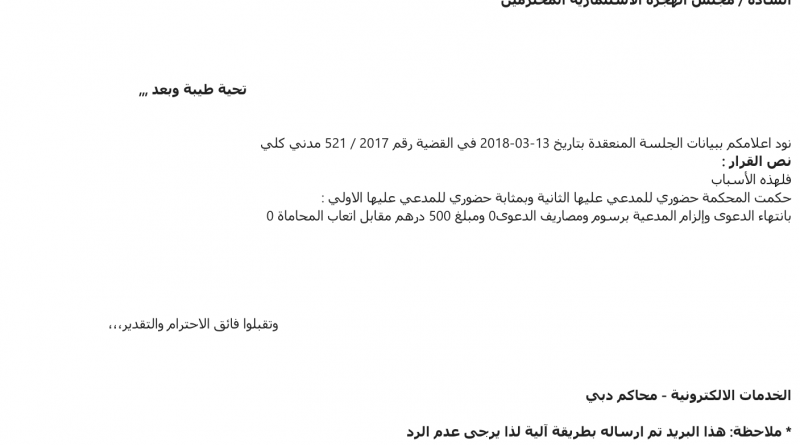 A Dubai court has issued a statement (in Arabic, attached) regarding the lawsuit Arton Capital has filed against Citizenship Invest, a former representative office of the Investment Migration Council, over what they claim were defamatory statements in a report co-written by the IMC and Transparency International on the now-defunct Hungarian Residency Bond Programme.

The contents of the court’s statement are somewhat ambiguous and appear to be inconclusive. So that the readers may make up their own minds about the implications of the statement, I am attaching it to this article.

Here’s what we know (as the editor does not read Arabic, he is relying on the accounts of both sides as to the interpretation of the contents):

1. The court appointed two experts to assess whether there was any merit to the case. The first, a financial expert, concluded that Arton had not sustained financial damages from the report. The second, a media expert, maintained that the report had contained defamatory statements for which Arton could be entitled to restitution. In other words, the experts appear to say that a) there were defamatory statements (at least according to UAE legal custom) but also that b) Arton did not incur financial damages. What are we to make of these contradictory assessments?

2.The IMC and Arton are (understandably) choosing to draw very different conclusions from the equivocal statement, with the IMC now considering the case closed, while Arton Capital says in a statement (reprinted below) that they will press forward with “pursuing damages against those involved in the publication of the report,” and are “planning to file for compensation”.

4. The IMC maintains that they have not been formally served with any lawsuit and that they know only of the case through third-party reports.

Arton Capital released the following statement (which makes no mention of the financial expert’s assessment).

DUBAI, United Arab Emirates – Arton Advisors, part of the Arton Capital group of companies, global leaders specializing in investor programmes for residency and citizenship, is planning to file for compensation as a next step in its case against the Investment Migration Council (IMC). In June of last year, Arton Advisors FZE filed a Court case with reference no. 521/2017 against a highly defamatory report, instigated by the Investment Migration Council (IMC), which contained many inaccuracies resulted in significant reputational damage to Arton Advisors.

The Dubai Court expert confirmed on March 13 all the defamatory materials mentioned in IMC’s report and considered such action adversely affects the reputation of Arton Advisors. The case no.521/2017 is now concluded.

The Court media expert agreed the report was defamatory under Dubai law. Based on the findings, Arton Advisors, as part of the Arton Capital group of companies, reserves the right to pursue anybody that promoted, or funded this report, in the criminal courts of Dubai.

The case centres on the publication of the report “In Whose Interest – Shadows Over the Hungarian Residency Bond Program”, which was sponsored and publicised by the IMC. At the time IMC had a representative office in Dubai run by Citizenship Invest.

Despite repeated warnings from Arton Advisors’ lawyers, the IMC continued to promote the report and even proceeded with discussing it in a special session at its annual meeting in Geneva in 5-7 June 2017. The IMC also promoted the report at a press conference in Budapest, Hungary on March 16 2017, and through numerous articles which were published in the aftermath.

Arton Advisors’ rights have been reserved as it presses forward with pursuing damages against those involved in the publication of the report.