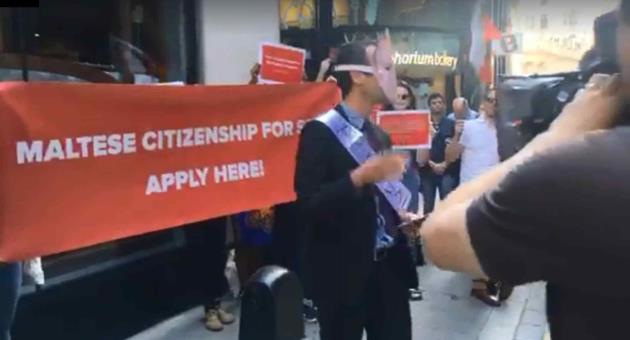 As service providers and government officials gathered to attend a gala dinner in honor of the success of the Malta Individual Investor Programme in London on Friday, a handful of anti-citizenship by investment activists gathered outside the entrance to protest.

The demonstrators held up placards bearing the inscription “Maltese citizenship for sale, apply here”, and a masked man with a megaphone “advertised” the MIIP, shouting “get your Maltese citizenship here. We offer you a great price and a great deal – no questions asked”, reports the Malta Independent.

Attendees at the gala dinner – jointly organized by the government of Malta and the official concessionaire of the IIP, Henley & Partners – reported that the demonstrators numbered around 10-15 individuals.

While the political majority in Malta has endorsed the MIIP in two consecutive elections, the nationalists in the Maltese polity continue to oppose the program, despite its considerable contributions to the country’s economy, as well as internationally endorsed due diligence and background verification practices.

Investment Migration Insider makes no secret of the fact that we are firmly on the side of the citizenship by investment industry – you can read why here: 6 moronic objections to investment migration (and how CBI/RBI is improving the lives of millions) – and frankly we would prefer not to give any airtime to the protesters and their unfounded accusations at all, but we cannot let this slide without pointing out the brazen misrepresentations this protest is designed to promulgate:

The masked buffoon claiming Maltese citizenship is available “no questions asked”, for example, either demonstrates a complete lack of knowledge about how the program works or is wilfully misleading the headline-reading public. The control mechanisms in place to prevent any abuse of the program are so comprehensive that only people who can demonstrate beyond any shadow of a doubt that they are upstanding and productive individuals ever receive approvals.

Image courtesy of the Malta Independent