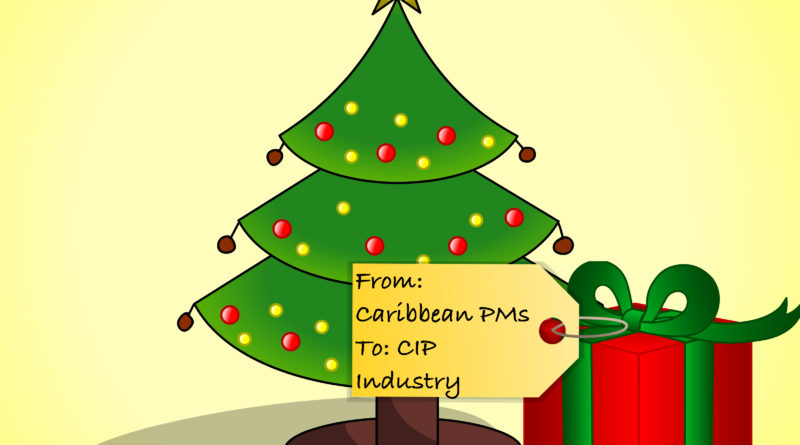 December is already upon us, and although reports surfaced ten days ago of the Caribbean heads of state convening to tackle the “race to the bottom” among citizenship by investment programs, we have yet to see so much as a statement confirming that the meeting even took place.

I’m about as close an observer of the global investment migration industry as there is and, in my assessment, the Caribbean price war is the most pressing issue of the industry today. Yet we haven’t given it the attention it warrants. The conundrum has been simmering in the background for years, but now it’s reached a boiling point. The time for deliberation and preliminary discussions is over. The Caribbean needs to reach an agreement on pricing now.

Continued wavering will only lead to the next price reduction. Were that to happen, it would be a true Rubicon-moment for Caribbean CIPs; Once that die is cast, the stage is set for pan-Caribbean revenue collapse. That way, only mayhem lies.

So, I’m making a list (and checking it twice) of reasons to reach a Caribbean CIP price accord pronto.

1.The Caribbean is missing out on a lot of money

Demand for Caribbean citizenships is what economists would refer to as price-inelastic, which is to say that a change in price does not result in a corresponding change in demand for the good, at least not proportionately. Most of the Caribbean CIPs cut their contribution requirements in half during 2017. Has that resulted in a doubling of demand? Not even close.

To be sure, the countries that cut their prices first did see an uptick in applications, but only because the others had not yet cut theirs. The late comers cannot expect similar surges in interest.

The reality is that the market had already accepted the prevailing price, and cutting it further only reduces total revenue. It makes sense micro-economically – nobody expected Antigua to simply put up with a “new normal” of 1.5 applications per month – but for the region as a whole, on a macro-level, it’s unequivocally detrimental.

Sam Raphael, the entrepreneur behind Jungle Bay in Dominica, told Investment Migration Insider in an interview that the reduced pricing is depriving the OECS-countries of “hundreds of millions of dollars, which the struggling Caribbean economies rely on for development.”

After Hurricane Maria tore through the West Indies, some countries used the need for additional relief funds as a pretext for cutting prices, but even a 50% discount didn’t result in the windfall of CBI revenue that was hoped for. It did, however, give rise to an ongoing domino-effect of contribution requirement reductions. Let’s hope they learned that setting off a price war is not how you solve a problem like Maria.

Another unintended consequence is that prospective investors may now be biding their time, waiting to see if prices will drop even further before proceeding with a citizenship application.

Read: Caribbean CIP “Race to the Bottom” – Is it Time to Form a Cartel?

“They’ll let anybody in these days” goes the thinking about Caribbean CIPs in the halls of power in Washington, Whitehall, and Brussels. Interpol, OECD and Homeland Security are not exactly thrilled by the lowered thresholds for Caribbean citizenship. Peter Vincent, General Counsel for Thomson Reuters and an anti-terror and money laundering expert, told Investment Migration Insider in an interview that his counterparts in government are looking at citizenship by investment with increasing concern, that they don’t have a nuanced view of the situation, and that they may come down hard on the industry if their fears are not allayed.

Visa-free access to Schengen is the thin line that separates the Caribbean economies from healthy GDP growth and economic ruin. An interruption to the CBI revenue stream would set some of these economies back by decades. Anything short of doing one’s utmost to address the concerns of the EU is playing with fire.

3. In the absence of price differences, countries will compete on quality

If the Caribbean programs all had the same price tag, the respective countries would have to differentiate themselves by becoming more attractive destinations and raising the relative value of their citizenships. This would mean working harder to increase the number of visa-waiver agreements and improve the quality-of-life aspects of their islands through, for example, infrastructure development, lifestyle options, tax incentives and so on.

This would benefit not only investors but also the local population.

Lower contribution requirements make the real estate options relatively more expensive. Cash donations are a great source of up-front revenue, sure, but tracing the money’s impact on the real economy is not a straightforward task, particularly in those Caribbean nations where the government has full control of the funds and have a laid-back approach to transparency and to reporting how the contributions are distributed.

Real estate development, on the other hand, provides jobs – in construction, hospitality, and goods supply – and can lay the foundation for a durable expansion of the tourism sector.

Crucially, capital invested in real estate ends up in private hands rather than in the custody of (notoriously profligate) bureaucrats, which means the return on capital is potentially far greater.

5. It would be the first step toward full-fledged unification

Several central figures in the CBI-world have publicly espoused the idea of turning the five Caribbean CIPs into a single program. It’s not a bad idea, for several reasons:

Read: One commission to rule them all: Caribbean moves a step closer to CIP harmonization

Is it realistic to expect a price agreement by Christmas? I remember the gut feeling I had when I was six years old and optimistically petitioned Santa for a pet orangutan.

I have a similar feeling now.