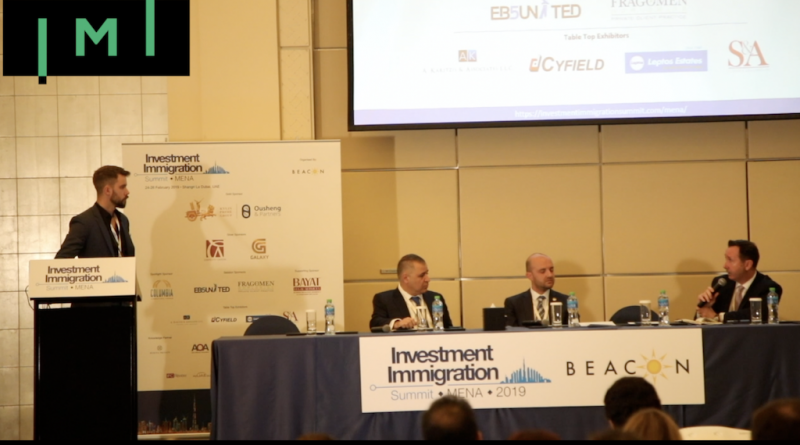 “The year ahead of us is going to be troublesome,” said Sam Bayat as he opened what would turn out to be a discussion about the improprieties surrounding the Saint Kitts & Nevis CIP real estate applications during a panel discussion at the Investment Immigration Summit in Dubai last month.

“A lot of truth is going to come out, and it’s not going to be nice. It’s probably going to implicate heads of government, heads of programs. Millions of dollars will probably have been lost. What’s sad is that the people who will pay the price are the poor people of these islands,” lamented the head of Bayat Legal.

“For about a year now, we have been informing the governments – mostly in Saint Kitts – that individuals are coming to us shopping for service providers, and they’re coming in giving us very low overall estimates of the cost, often less than US$150,000 [quotes obtained from competing RCBI-advisories]. Of course, we’ve informed the government of that and there was no action,” Bayat told the audience, explaining that his firm’s analysis found that agents had switched some 2-300 of the 1,200 applications under the Hurricane Relief Fund to real estate.

Up until today, said Bayat, he had received no news on the matter at all from government officials – about whom he said “ la ” – adding that clients concerned about the legitimacy of their already completed investment in the program had contacted him following the story appearing in Gulf News a few weeks prior.

“Whenever I speak with anyone in Saint Kitts, they say ‘what’s your problem? The government is getting their share’, and I say ‘yes, but the government could get more,” Bayat stressed, pointing out that Saint Kitts & Nevis would raise twice as much if clients did not change their application to real estate that goes undeveloped. “Your people are getting the short end of the stick.”

“Sam is ruffling too many feathers, perhaps”

“I think it shows immaturity in the industry – from both sides. It takes two to Tango. There has to be an element of government involved and there has to be an unscrupulous agent,” he commented.

“It amazes me that this can go on in any financial services industry these days. I still think the CIP industry has a lot to learn in terms of transparency and due diligence […] but something like this will always happen if it’s permitted to happen from the government’s side.”

Questioned as to whether he thought those who have the power to put an end to such malpractice were knowingly turning a blind eye to it, Hanafin indicated this appeared the most plausible explanation for the reticence with which the government has treated the matter.

“It must be the case,” said Hanafin, noting that, if someone as influential as Sam Bayat could not get a response from the authorities, this suggested that “higher levels are involved, perhaps, and Sam is being told to keep quiet because people are winning on both sides, so Sam is ruffling too many feathers, perhaps.”