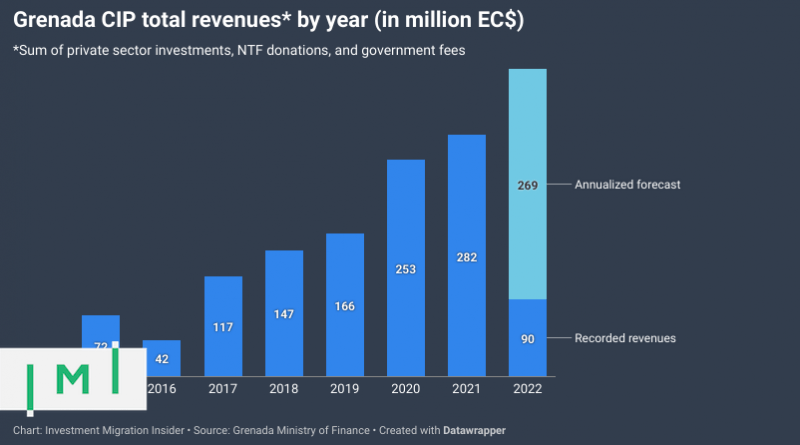 Grenada’s Citizenship by Investment Program raised more than EC$89.8 million (about US$33m) during the first quarter of the year, figures from the Ministry of Finance this week reveal. The total influx of capital through the program (the EC$89.8m includes property investment, donations, and government fees) reached the second-highest level on record, surpassed only by the final quarter of last year, during which the program saw inflows of EC$95.3m

The Grenada CIU received a total of 164 applications during the quarter, approved 119, and rejected one. 391 individuals received Grenadian passports during the period, implying an average family size of 3.3 members.

Grenada CIP applicants continue to favor real estate over donations; approvals under the property investment option have outpaced those under the NTF route in six of the last seven quarters. The dip in real estate applications observed around the time of the dispute between the government and the developers of the Kawana Bay resort has since reversed, and investors once more display a clear preference for investment over donations.

So far this year, 66% of approved applicants have qualified through real estate investment, the highest such proportion since 2015, a year during which application and approval volumes were far smaller than today.

Q1 revenue figures bode well for the program's 2022 performance; the EC$89.8 million raised represents a 28% improvement on the same quarter last year and, if linearly extrapolated, would imply annual receipts in 2022 of EC$359m, about 27% greater than in 2021.