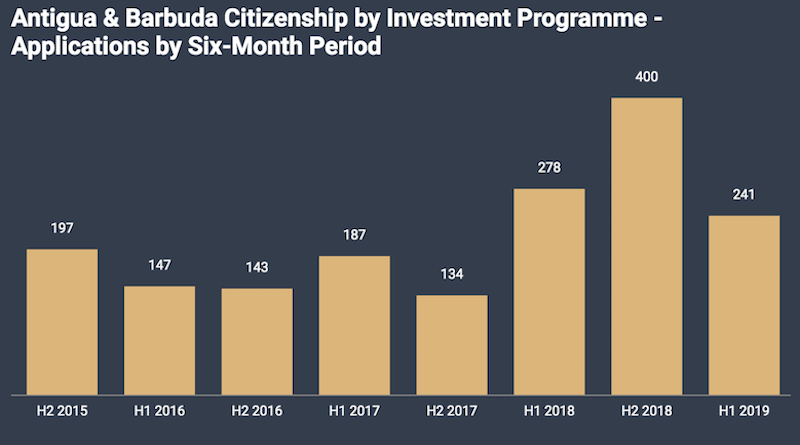 The recently released six-month report on the Antigua & Barbuda CIP shows applications in H1 2019 are down by 40% compared to H2 2018 and that the share of applicants who choose the real estate or business investment options rather than the NDF contribution option is now only 3%.

The CIU received 241 applications between January 1st and June 30th, 2019, a figure 40% below that recorded during the preceding six-month period. Of these, 233 opted to make a contribution to the National Development Fund (NDF), while a mere five and three applicants chose the real estate and business investment options, respectively.

Following the reductions in minimum contribution amounts in late 2017, interest in anything other than the NDF option has all but vanished.

See also: Antigua PM: Are Caribbean CIPs Under Assault Because They Compete With European Ones?

Chinese investors once more accounted for the largest single share of applications, amounting to 29% of the total. Bangladeshi and Libyan investors made up eight and seven percent of applicants, respectively, closely followed by Russians (7%), Syrians (5%), and Lebanese (5%).

Of the 2,188 applications received since the program’s inception, Chinese applicants accounted for slightly more than a third, while Russians and Syrians make up, respectively, 6.5% and 5.5% of the aggregate.

A grand total of 644 individuals received citizenships in the country during H1 2019. Presuming relative constancy in application volume for H2 2019, Antigua & Barbuda will have naturalized some 1288 citizens by the end of 2019, bringing the overall number of citizens naturalized under the auspices of the CIP to about 4,000.

Presuming naturalizations in H2 2019 – the official figures of which (may) become available within the next six months – reach a similar level to that observed in H1, Antigua & Barbuda’s CIP will see a 2019 statistically on par with 2018.

Want to know more about the Antigua & Barbuda CIP? To see recent articles, statistics, properties, and more, visit its Program Page. To see which firms can assist with applications to the program, visit the Residence & Citizenship by Investment Company Directory.