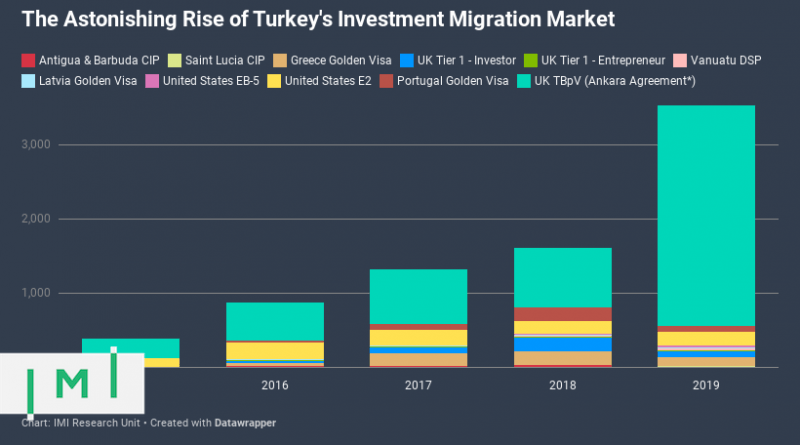 Turkey, the 5th most eligible RCBI market in 2020 according to the Investment Migration Market Eligibility Index, is a 2-for-1 investment migration market: It is not merely one of the world’s largest source countries for investor migrants; since 2017, it’s also hosted what in but a few short years has become the most popular citizenship by investment program globally, and by a wide margin.

During March, April, and May this year – at the height of the pandemic – Turkey’s Interior Ministry approved an average of more than 1,300 main applicants a month, raising an estimated US$17 million a day. In the two years since it lowered its minimum investment requirement to US$250,000, it has naturalized some 35,000 individuals under the CIP.

Figures of this magnitude have no parallel in CBI-history.

What explains Turkey’s astonishing CBI-success?
Various explanations have been offered for the sudden success of the Turkish CIP, which doesn’t come with the visa-free travel to Schengen offered by the Caribbean competitors that Turkey has left in the dust. Hypotheses about what accounts for this star performance range from the naïvely patriotic (Turkey is simply a very attractive destination) to the more cynical (very lax due diligence compared to other programs).

The truth is likely somewhere between the two extremes, and a great deal more nuanced. Many of the largest applicant groups for the Turkish CIP hold nationalities that automatically preclude – or at least complicate – their participation in many Caribbean and European CIPs (see: Overview of the Restricted Nationalities Lists of Citizenship by Investment Programs). Turkey also has geographic, cultural, and religious proximity to the vast Middle Eastern RCBI market, perhaps the part of the world where investment migration has advanced the furthest in terms of mass adoption.

Unlike its Caribbean counterparts, the Turkish CIP allows for the acquisition of real estate on the open market, effectively eliminating CBI-premiums on property prices. A historically cheap Lira combined with ongoing COVID-related travel restrictions are enabling real estate bargains on a broad scale.

Some of the pull factors that make Turkey so popular among Pakistani, Iraqi, and Irani investor migrants are, conversely, push-factors from the perspective of Turks themselves. The precipitous fall of the Lira and the country’s recent, sharp departure from its tradition of secular liberalism are examples of this phenomenon. Just as a Turkish citizenship may be an upgrade for an Afghani investor, UK or EU residency represents a step up for Turks.

Turkey’s investment migration market (outbound) has doubled every year for the last five years
Through immigration benefits secured by the 1969 Ankara Agreement, Turkish nationals can avail themselves of The UK’s Turkish Businessperson Visa (TBpV), essentially a Turks-only self-employment visa that has no minimum investment requirement beyond a flexibly defined “sufficient funds to establish your business”. During the 2015-19 period, Turkish uptake for the program grew by a factor of ten. Last year, nearly 3,000 main applicants, and about the same number of dependents, obtained Leaves to Remain in the UK thanks to the TBpV. About a thousand Turkish families have moved to the US on E2 visas during the same period, while the Greek golden visa, the third-most-popular program among Turks, accounted for 518 approved applications.

Overall, outbound RCBI traffic from Turkey has swelled at a compound annual growth rate (CAGR) of 74% in the last five years, indicating a doubling of the market size each year.

Some 160,000 Turks qualify as US$ millionaires. New World Wealth estimates that nearly 18,000 Turkish HNWI have left the country in the last four years. Entrepot Istanbul acts as a hub for private client services catering to HNWI across the wider region, much like Dubai does on the Arabian peninsula. The Turkish economy has grown at an enviable average rate of 7% a year in the last five years, a clip the IMF prognosticated would continue apace for the next five as well, at least prior to the pandemic.

Turkey distinguishes itself among the countries in the 10 Most Eligible RCBI Markets in 2020 Report for its relative accessibility: Cosmopolitan Istanbul offers an Ease of Doing Business ranking, Index of Economic Freedom score, and skill pool on par with most continental European destinations. This means that starting a business, finding qualified employees, and paying taxes are not significantly more challenging in Istanbul than in, say, Athens.

Turkey’s high degree of inbound and outbound RCBI demand, coupled with its accessibility has also made Turkey’s market more competitive. But while the introduction of a CIP in 2017 drove a rapid growth spurt in the domestic CBI advisory market, most Turkish providers that offer such services focus exclusively on the inbound market. In the last five years, several of the largest international IM-specialists have entered Turkey (Arton Capital, Bayat Group, Discus Holdings, and NTL, to mention a few), a trend that is poised to continue in the near-term.

To learn more about the most eligible RCBI markets in 2020, see our recently published report: