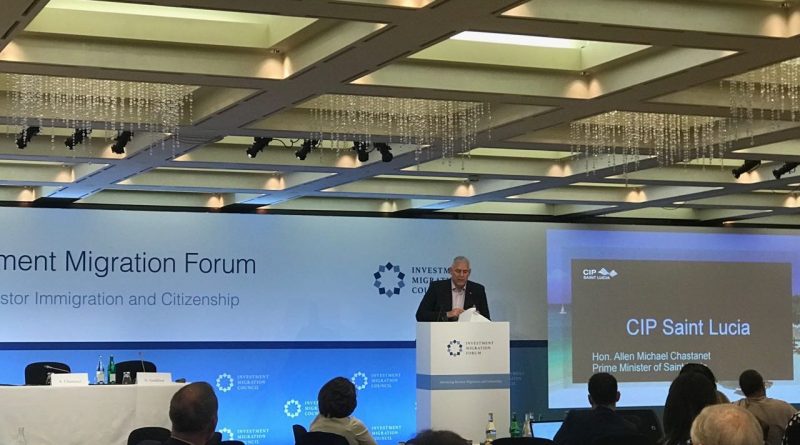 It was during Wednesday’s session of the Investment Migration Forum, in front of three hundred or so delegates assembled in the Geneva Kempinski’s Grand Ballroom, that Saint Lucian Prime Minister Allen Chastanet announced his country’s CIP will begin paying a 10% commission to all registered agents promoting the $100,000 contribution option.

The audience – a veritable Who’s Who of the investment migration industry; CEOs of the world’s largest immigration firms, CIU-officials, the field’s most prominent academics as well as heads of state – met the news with cheers.

The PM also went on to dispel any confusion about the rights pertaining to citizenships obtained by investment, saying individuals naturalized through the country’s CIP have the same rights as Saint Lucia-born citizens:

Commenting on the recent tribulations of Caribbean banks – sizeable payments to which are frequently withheld or even halted by US intermediary banks due ostensibly inadequate documentation – the PM revealed plans to accept CIP payments in denominations other than the US dollar as a means of circumventing the correspondent banking system that is currently delaying the transfer of CIP funds from investors to the country.

Chastanet further disclosed plans for opening a Saint Lucian residence by investment program. The scheme would enable successful applicants to settle permanently in Saint Lucia (and, by extension, any CARICOM state) and to apply for citizenship after five years. Residents obtaining a PR through this program would be taxed at a very low, non-domicile tax rate. The PM promised further details on this program in the weeks to come.