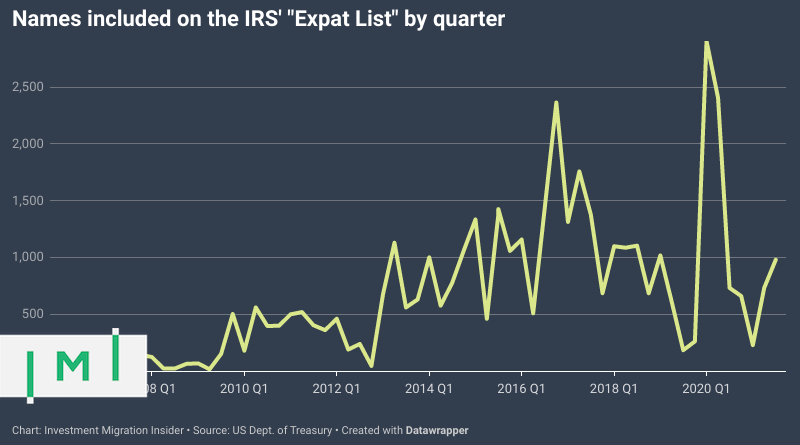 In its Quarterly Publication of Individuals Who Have Chosen to Expatriate for Q3 2021 published this week, the US Internal Revenue Service (IRS) lists 980 names of covered expatriates who have successfully renounced their US citizenships.

While the 980 published expatriations represent an acceleration on the quarter (up from 733 in Q2, 2021), they remain low compared to the figures published in 2020, a year during which the Expat List contained 6,705 names. Note that the time it takes from when an expatriation actually occurs and until it is published on the List is between 24 and 28 months, according to David Lesperance, who regularly helps American clients renounce citizenship. The 980 expatriations reported for Q3, 2021, therefore, really stem from the Q2-Q3 2019 period.

At the onset of the pandemic, toward the end of Q1 2020, the US suspended nearly all routine services - including renunciation appointments - in its embassies and consulates around the world. When the quarterly Expat List corresponding to that period is released sometime in the next six months, explains Lesperance, we should expect renunciation numbers to "fall off a cliff".

Lesperance has previously argued that the US State Department is deliberately making renunciation difficult, if not impossible, and is merely using the pandemic as an excuse to prevent expatriation.

The suspension of consular services like passport renewals, registration of foreign births, and renunciation, says Lesperance, remains in effect even in localities that never had lockdowns or severe outbreaks.

"While many of these services are conducted on a mail-in basis in the US and could easily be done the same way abroad, renunciation requires the swearing in front of a Consular Officer. However, the officer stands behind a 3-inch thick glass wall. With basic precautions, there is no danger. […] In many countries, you can go to the gym or get a massage, but you cannot get consular services to exercise one of your most fundamental rights as citizens – the right to vote with your feet."

Lesperance claims in a press release today that the US government is engaged in a systematic effort to suppress renunciation and points to several indications that this is merely the continuation of a trend of erecting barriers to renunciation that predates COVID:

Lesperance recently conducted an email survey of US consular missions to see which would still offer renunciation appointments, 19 months after the onset of the pandemic. Most missions, he says, still respond that renunciation services remain temporarily suspended due to COVID and that they are unsure as to when the suspension may be lifted. The US Embassy in Bern, likewise, says it is unable to accept renunciation appointments and adds that it has a waitlist of more than 400 that they need to process before they can give out further appointments.

"In the over 30 years since I assisted my first American client to renounce their US citizenship, I have never seen such a blatant attempt to deny Americans this fundamental right," says Lesperance. "Since these interviews take at most an hour to complete and are done through bulletproof glass, there is no reason why every Mission should not be scheduling interviews or have any backlog - let alone one of several hundred cases."

The Expat List includes only the names of so-called "covered expatriates", i.e., individuals with a net worth of more than US$2 million. The true extent of the backlog is therefore vastly underreported, Lesperance maintains. He says he filed a Freedom of Information request to obtain the actual number of renunciations with the State Department 46 months ago. The promised response date has since been postponed twice and Lesperance still awaits the answer to his FOI request.

Last week the Association of Accidental Americans (AAA) – a French-registered non-profit representing individuals who, by accident of birth on US territory, have become US citizens – filed a lawsuit against the US State Department over its suspension of Voluntary Expatriation Services at its various diplomatic missions around the world. The suspensions, say the plaintiffs, are unconstitutional and violate the fifth amendment's due process rights, amounts to discrimination of Americans, and forces individuals to remain citizens against their will.